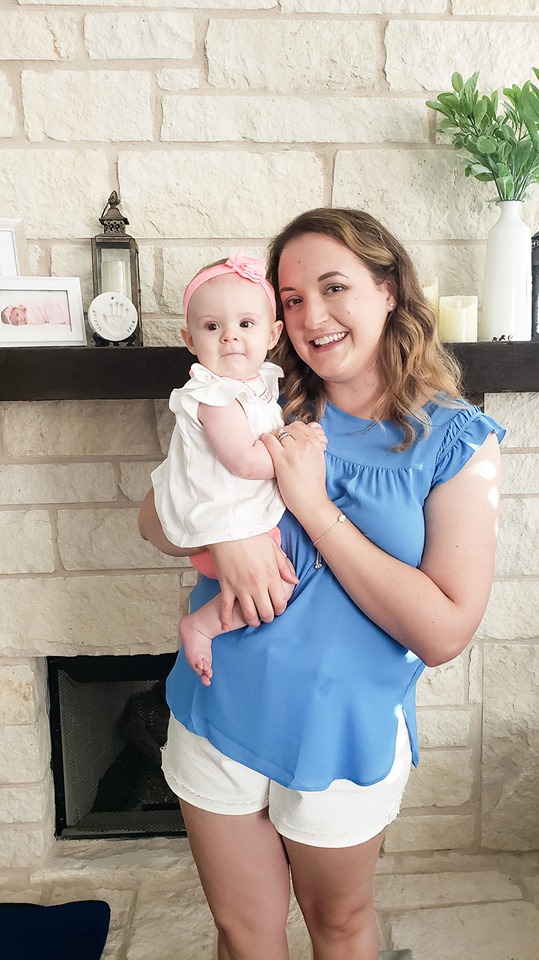 It’s hard to believe that we are only three months away from our baby turning one! The months are just flying by. I thought it would be fun to do a little update here on the blog about how Abbey is doing and how we are adjusting as a family of four! If you’re interested, I did a three-month update a while back.

Here’s what’s been going on the past six months!

Around five months, I stopped pumping breastmilk (read about our exclusive pumping journey here) and we switched over to formula. Thankfully we had no issues switching her to regular Similac from breastmilk! At nine months old, she’s taking 4-5 6-oz bottles a day (about 24-30oz total), every 3-4 hours. We are still using the Avent reflux bottles, although ever since we had her upper lip tie clipped at six months old, she’s had almost no issues with spitting up.

Abbey also eats 3 meals per day! Our daily schedule looks something like this:

Abbey LOVES to eat. We started solids at six months old (when she could officially sit on her own), starting with purees. Once she got the hang of swallowing the food instead of just pushing it out with her tongue, I moved on to more soft/solid foods. At nine months old, we do mostly baby-led weaning, which is offering baby soft finger foods and letting them feed themselves. I love to watch her rake food towards her mouth — she tries to shove as much in as she can! 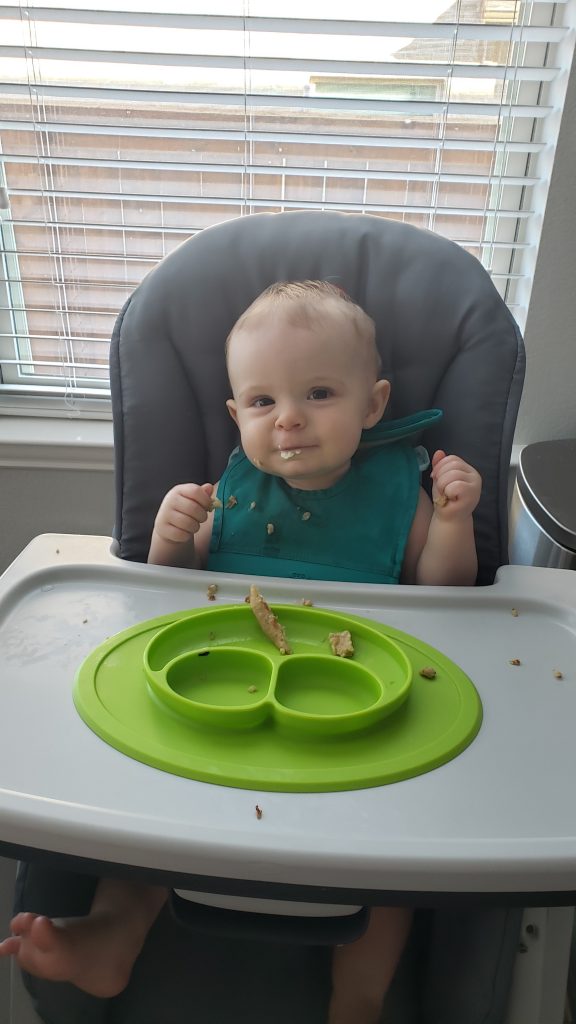 Her favorite breakfast foods are banana oatmeal pancakes, strawberries, and scrambled eggs (especially with salsa!). For lunch and dinner, I typically try to give her some form of protein (shredded chicken/turkey, cottage cheese, fresh mozzarella or beans) along with carbs (puffs, pasta, rice) and a veggie. If I can give her some of what I’m eating, I do. I’m trying my best to expose her to as many flavors as possible! Her favorite foods are strawberries, kiwi, beans and grilled zucchini. The only foods she doesn’t really like is plain oatmeal (yuck), plain bananas and watermelon. But I will keep trying these foods again and again!

She has two little teeth on the bottom front. I think she’s about to cut her first upper tooth soon! 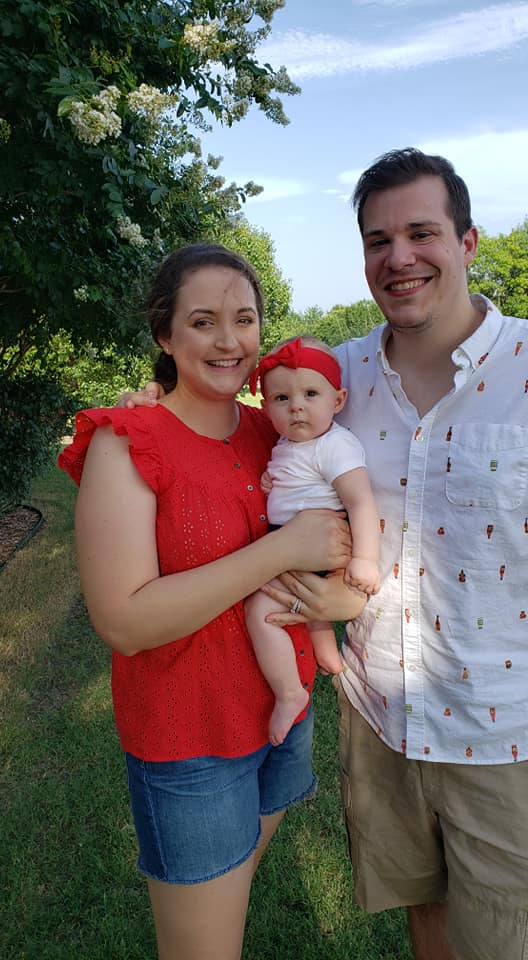 I definitely got lucky with a baby who sleeps well. She is so good about staying on her schedule. Since 5 months old, she’s been sleeping 12 hours straight at night. I haven’t had to go upstairs to her nursery at all. She puts herself to sleep for both naps and nighttime! I give full credit to Taking Cara Babies — I did her newborn class and her 3/4 month class and it was AMAZING. The key takeaways that we practice are: offer a nap according to baby’s wake times (adjust for age), which is about 3 hours for a 9 month old, never let baby nap more than 2 hours at a time, wake them up at least 3 hours before bedtime, use blackout curtains, a sound machine, sleep sack, and a paci.

Once she started sleeping 12 hours straight I finally felt like I got my life back! I do miss her at night while she’s sleeping, though. 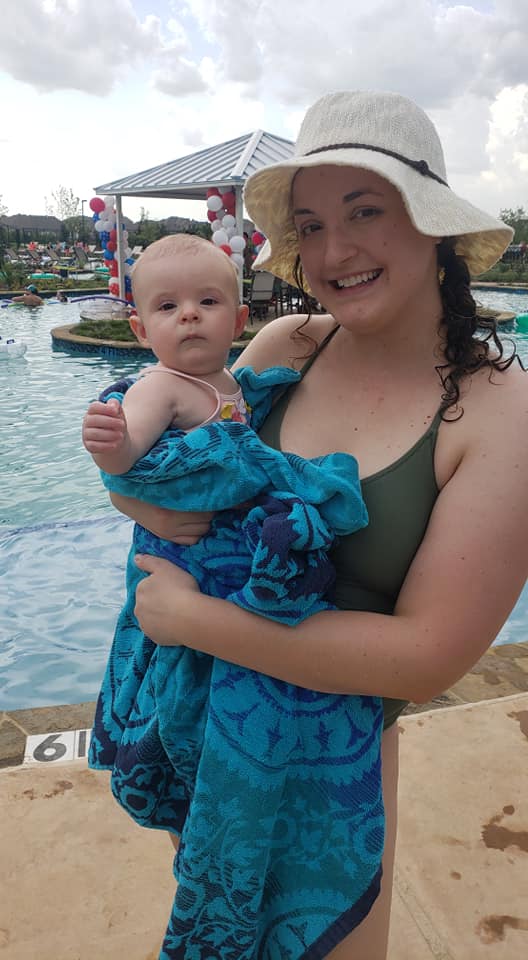 We’ve got a mobile baby! Abbey started army crawling around 7 months old, and did that for about 2 months until she finally figured out how to get up on her hands and knees. At almost nine months old she started crawling the traditional way, and a week later, started pulling up! She says “baba”, “mama”, “dada” and my personal favorite, “fvv fvv”. I don’t think she associates “mama” or “dada” with us yet, but she is making the sounds! 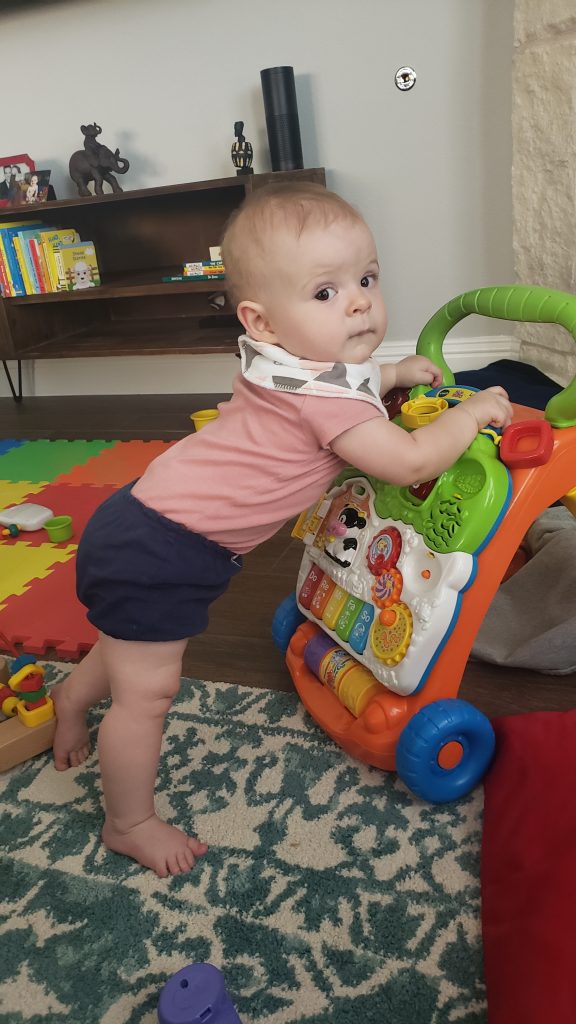 She loves all of her toys, but her favorite right now is the walker with the purple phone. She loves smacking the parts to make noise and ripping the purple phone on and off. She is really good at entertaining herself and will sit and play by herself contently! Now that she’s crawling fast, she likes to follow me around into the kitchen, bedroom, bathroom, etc and is curious about everything.

This week she’s started tugging on my shirt to pull herself up, which is really cute. She loves to read — every morning after her bottle, we sit in the rocking chair and read her favorite books. “Baby Beluga” and “Brown Bear, Brown Bear” make her little face light up and it’s so adorable! We also go to storytime at the library once a week, which is nice. They have the most adorable infant storytime where they sing songs, rhymes, and even have a bubble machine! Several mom friends from my neighborhood also attend, which is nice for me! 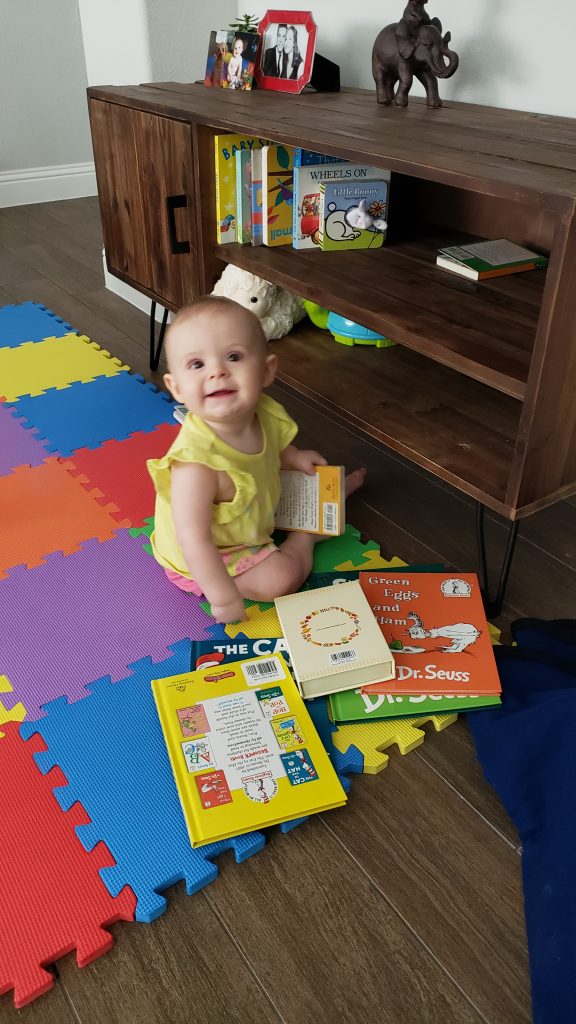 We’ve taken her to the neighborhood pool several times. She likes to hang out in her shaded floaty and just observe. She is a very chill baby, haha. After a while being in the water, she will finally start splashing around and playing. Just a little apprehensive at first. 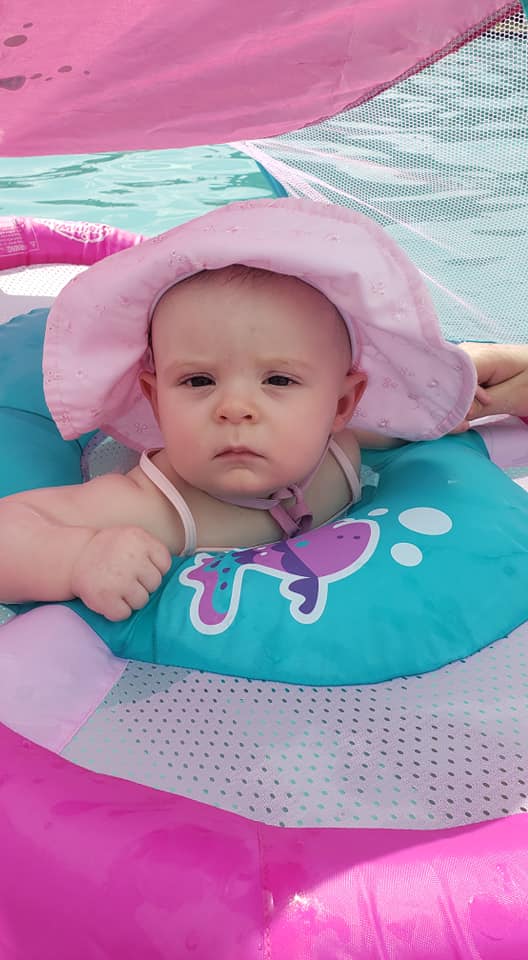 As I stated in my three-month update, postpartum was/still is rough. Even nine months after giving birth, I still don’t feel like myself in my body. It’s crazy how much change happens! Even though I know dieting is not the answer, I will be honest in saying that I’ve gotten the urge. I try to practice intuitive eating as best I can because I know dieting will only mess with my body, mind, and metabolism. I’ve been trying to incorporate mindful and enjoyable movement. About three months ago, we bought a spin bike. I’ve been doing Peloton cycle workouts which are super upbeat with fun music! The hardest part of trying to be active is the lack of energy. I work from home part-time and lug around a 20-pound baby, keeping up with her schedule, and it’s exhausting!

Mentally, I finally decided to go on anxiety medicine. Mental health is so important and it just got to a breaking point. I’ve also been taking CBD oil, Ashwagandha, and magnesium and that seems to help.

I am still working from home — about 15  hours a week goes to one client in particular, and the rest goes to other clients and blog maintenance. I’ve tried setting up a schedule in google calendar which helps. We finally decided to hire a nanny for one day a week, so I use that day to sit at my computer and get as much done as possible. Doing computer work with a baby is almost impossible! Especially if they do not like to be contained!

I think that’s everything! I will be sure to do a 12 months update along with pictures of her birthday party.