About three months ago I pumped for my very last session for Abbey. My goal when I started this whole adventure was to make it to six months– and I was just one week shy of that goal. I wasn’t sad one bit that I didn’t make it the full six months as it just felt like it was the right time to stop. Today I’m talking about our pumping journey in hopes that it brings awareness to exclusive pumping and helps other moms out there!

Exclusive pumping is not often talked about. Some women don’t even realize it’s an option! I’ve dreamed for years of sweetly nursing my babies around the clock. Being able to instantly feed my baby at any moment’s notice. Breastfeeding is portrayed as this wonderful, natural, easy thing that every woman should be able to do. And while that’s the truth for many, for some it’s just not feasible. There are many reasons a mom may choose to exclusively pump, but often the main reason is that the baby doesn’t latch correctly (despite many attempts to correct).

That very reason is why we chose to exclusively pump. About an hour after Abigail was born, she seemed to latch on well and was sucking, and we did this several more times the morning she was born. We stayed in the hospital for 3 days and the lactation consultants came by at least once per day to help us out. My nipple kept coming out creased after each feeding and we couldn’t figure out why. The consultants kept talking about how well she latched, but she was causing creased nipples, cracks, bleeding, the works. The pediatrician in the hospital snipped her tongue tie, but that didn’t seem to help much. We went home and I kept trying to nurse her every couple of hours but it was getting to the point where my toes would curl in pain every time she would latch.

I kept this up for about 3 weeks. I attended a breastfeeding support group where I was told by the lactation consultants, again, that we had a great latch. So why were we having such terrible problems with nipple pain and cracking? At this point, I stopped trying to latch her completely and started pumping. I finally had a chance to heal and Abigail was eating really well from the bottle. I went back and forth for about a month — pumping and trying to latch her occasionally out of pure guilt. I would have a great day of pumping with tons of output, she would eat great from the bottle, and I would feel SO guilty. I cried so many times during that month. It’s almost as if I had to mourn not directly breastfeeding.

After a month or so of torturing myself, my husband finally told me I should just pick one way: exclusive pump or figure this nursing thing out. He pointed out how well pumping was going and how well Abbey was eating, and that it didn’t really matter how she was getting the breast milk. I finally let go of my guilt for not directly nursing and committed to exclusive pumping. I didn’t feel 100% great about this decision until about two or three months in, but eventually, I felt okay with it all. 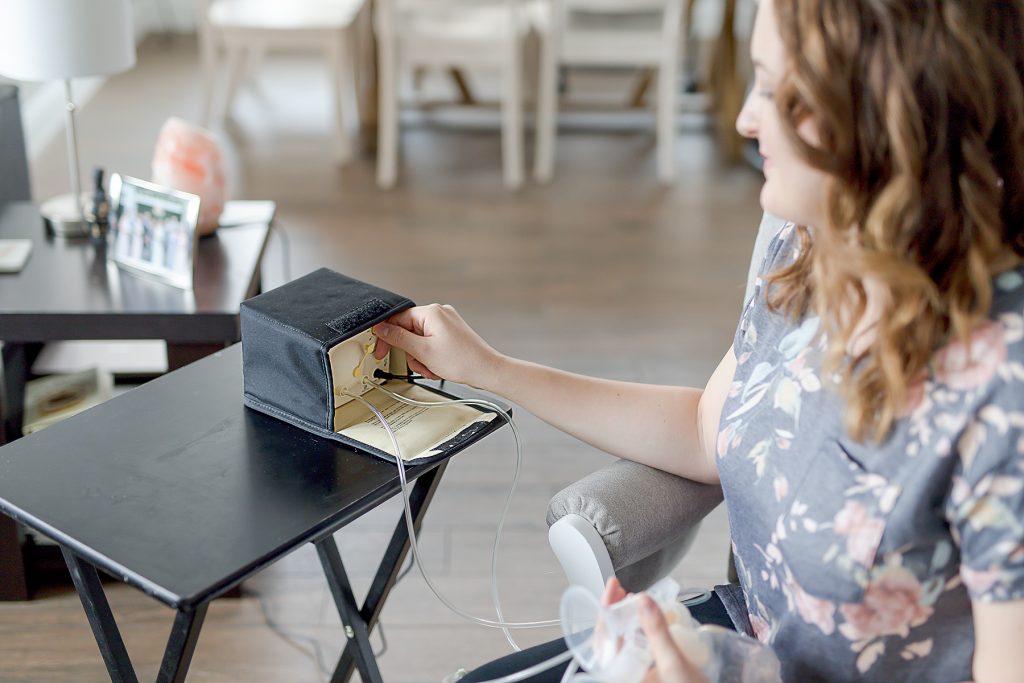 When I first started pumping (I used the Medela Pump in Style), I was pumping for 20-30 minutes, every 3 hours or 8 times per day (6am, 9am, 12pm, 3pm, 6pm, 9pm, 12pm, 3am). This was obviously during my maternity leave as no normal human could spend this amount of time hooked up to a pump like this. I kept this schedule for about 2 months, pumping usually while Abbey was sleeping during the day. Once I got into that routine, I stretched out my pumps to every 4 hours and 6 times a day (6am, 10am, 2pm, 6pm, 10pm, 3am). This was a little more manageable and I kept this up from 2 months to about 4 months.

However, during this time I ran into SO many issues. I can’t even tell you how many times I almost gave up entirely during these early months. I was what you’d call an “over producer”, meaning I produced 4-5 ounces from each breast during each pump. My total output for the day would sometimes be close to 45-50 ounces. While this is lucky as far as having plenty of milk and creating an abundant freezer stash, it comes with its own set of problem.

Having an oversupply meant I constantly had plugged ducts. It would happen at least once or twice a week. I learned that manual massage during the pump session was the only way to prevent this from happening, as well as frequent Epsom salt baths and heat packs. I also had an issue several times with blisters. I found that lubricating the flange with olive oil completely prevented these from forming, so I bought a little squirt bottle and filled it with olive oil.

I also got to experience mastitis THREE times in a one-month period and that was awful. The good thing is the antibiotics work pretty quickly, so these bouts only lasted a couple of days each. I found that I had to use a 21mm flange on one side and a 24mm on the other. This combo really helped prevent nipple damage and was the most comfortable.

Any leftover milk I had would get labeled and frozen. I followed the 4 hours at room temperature rule for leaving milk out after pumping, otherwise, it got put in the fridge. I liked to label my bottles with the “expiration” time so I would know when to put it in the fridge. Once Abbey started eating more on a schedule I didn’t have to do this anymore, but it helped in the beginning when her feedings were more random. 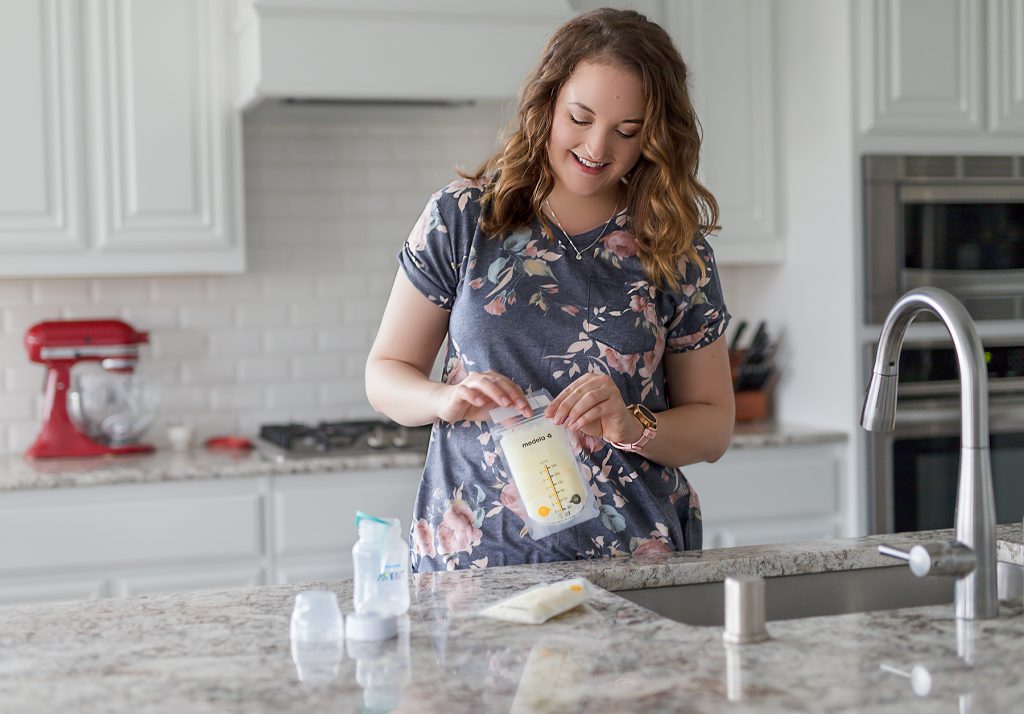 Weaning and cutting out pumping sessions

Around the four-month mark, I started working more during the day. I found that it was incredibly hard to sit down and do my 10am, 12pm, 3pm and 6pm sessions so I began to cut sessions out one at a time. The crazy thing is my output remained relatively the same (about 35oz) even though I was cutting sessions out. Around this time Abbey began to drink 6oz bottles instead of 4oz, so I had to start dipping into my freezer supply. By that point, I had about 300oz frozen, so I began to thaw out a couple of bags each day to make up for the sessions I was cutting.

When Abbey was three-ish months old, we cut out the 3 am feeding. One night she randomly slept right through it, so she had decided she didn’t need it anymore! At that point, there was no way I was going to wake up in the middle of the night to pump, so that session went away as well.

Around four months, I was pumping four times per day (7am, 12pm, 5pm, 10pm) and then as the month progressed, cut down to three times (7am, 3pm, 10pm). This was fairly easy to maintain, but as time went on I felt like cutting the 3pm session out. So by the time Abbey turned 5 months old, I was down to a 7am and 10pm pump. At this point, I was using both my freezer supply and supplementing with formula.

As her fifth month went on, I decided I was officially done and started weaning completely. I started by cutting down the times of my two pumps from 20 minutes to 15. Then, I worked on cutting down the time of my evening session until it was gone completely. Now, I just had my morning session which I cut from 15 minutes down to 10, 5, then zero! It was convenient timing that I got my period (the first in over 16 months) the week I weaned from the pump (menstruation causes a dip in milk supply). 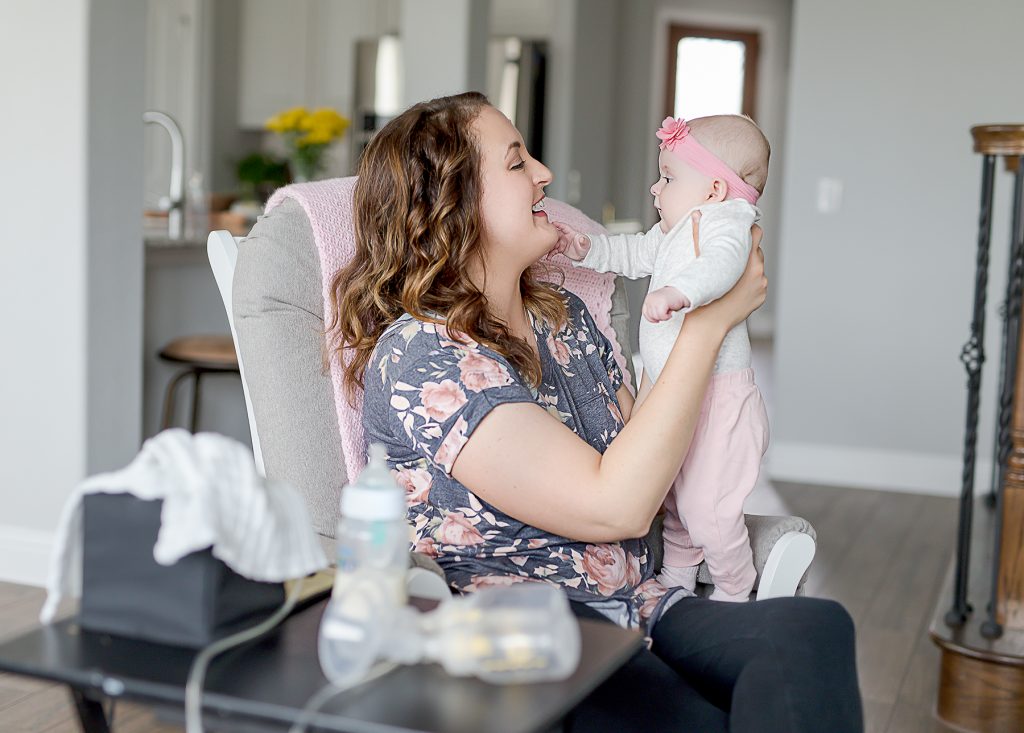 I had very mixed feelings when I began to wean the pump. I was extremely excited to get my body back to myself and to not have to sit down to multiple sessions per day while trying to both wrangle a baby and work from home. But, as my milk supply began to go away, I did feel a little sad. All of these months, I was so proud of myself for sticking through this and for supplying my baby with everything she needed to grow. It was fun to see how much milk I could produce per session, and it did feel good to see that.

But postpartum is hard. It’s hard enough to deal with healing both physically and mentally from a traumatic experience (even if you had a textbook delivery with no complications, it’s still traumatic in my book), but also spending all of our time taking care of a brand new baby. Add in sleep deprivation and pressure to feed your baby a certain way and it just becomes too much for some moms.

Honestly, I’m not sure how I made it this long pumping. Sure, towards the end, it wasn’t terrible. But man, it was a lot of work. It was tough to take breaks from work during the day for 30 minutes at a time. Combine that with feeding the baby at the same time, I felt like I was never getting anything done (I still feel that way, haha). If I ever had to go anywhere for more than 3 hours, I had to bring the pump with me. I pumped many times in the car and at other people’s houses.

We ended up having her upper lip tie clipped when she was 6 months old. She was having issues with her top lip not wrapping around the nipple of the bottle correctly, milk leaking around her mouth, and excessive spit-up. Immediately afterward, we noticed a difference. Her bottle latch improved significantly. So in the end, this is most likely the reason she couldn’t latch on the breast correctly (my occupational therapist sister would say “I told you so!”).

Exclusive pumping is not easy (neither is nursing!) and it isn’t for everyone. Because I work from home and stay home with Abbey, it was probably easier for me than someone who has to go into an office. There are many benefits — others are able to bond with baby by giving her bottles, baby is getting breastmilk with all of its benefits, and you can directly see how much baby is drinking per day.

Would I do it all again? Maybe. Probably. I will give nursing another try whenever we decide to have our second child, for sure. If nursing doesn’t work out again, I will most likely pump for that child as well. But, I have no idea how difficult that will be juggling a toddler, newborn and a pump! So who knows. The hardest part about exclusive pumping was the emotional part. I was afraid I wouldn’t be able to bond with my baby by not nursing. I felt so much guilt for “giving up”.

I just told myself over and over again: not only did you spend 38 weeks growing this baby, but now you alone are providing all the nutrition she needs to continue growing out of the womb. It doesn’t matter how she gets it, as long as she’s getting fed. I don’t regret any of it, and I still love and am bonded to my baby just the same. <3