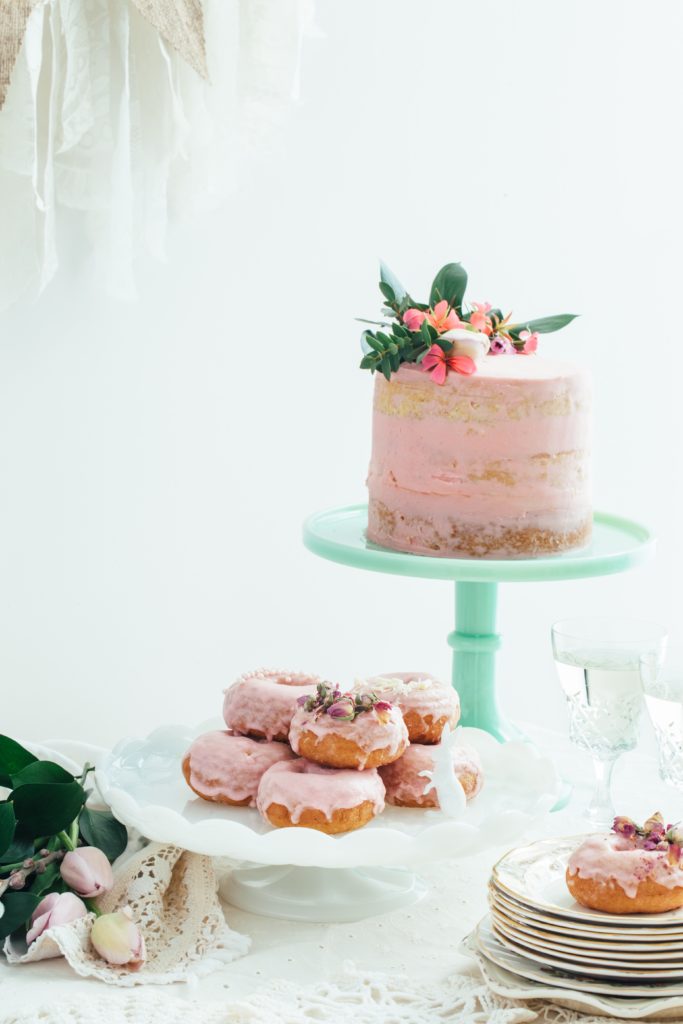 Hi friends! Happy Friday :) Today just so happens to be my 28th birthday. Life has been pretty crazy lately so I thought I’d give y’all an update on what’s been going on. If we were having coffee + donuts today to celebrate my birthday, here’s what I’d say!

I just hit 25 weeks! Only two more weeks until the 3rd trimester begins. We had our 24 week checkup and everything looks great for baby girl, she’s growing right on track. Her heartbeat was in the 150’s and she’s been moving a ton! I feel like she’s moving most of the day, although I know she’s got to rest at some point. Some days she moves more than others and it’s actually a little uncomfortable and annoying, haha. It feels like someone is tickling me from the inside. We do have a name picked out now but we are only telling close friends and family until she’s born. :)

As far as symptoms go, I haven’t been feeling that bad. I’ve been eating a TON and just feeling starving around the clock. I’ve really been trying to pay attention to my body as far as what feels good after I eat it, and fruit tends to satisfy my cravings and helps me not feel too sluggish afterwards. Sweets have been my jam (haha get it?) and it’s funny because I wasn’t that into sweets before I got pregnant. Now, sweets taste AMAZING. There’s this donut shop down the street where we had been a couple times before pregnancy and the donuts tasted good, but just tasted like regular donuts. Now, being pregnant, these donuts taste like the BEST FREAKING DONUTS I’ve ever tasted. Everything sweet just seems over exaggerated and is like a flavor explosion in my mouth. 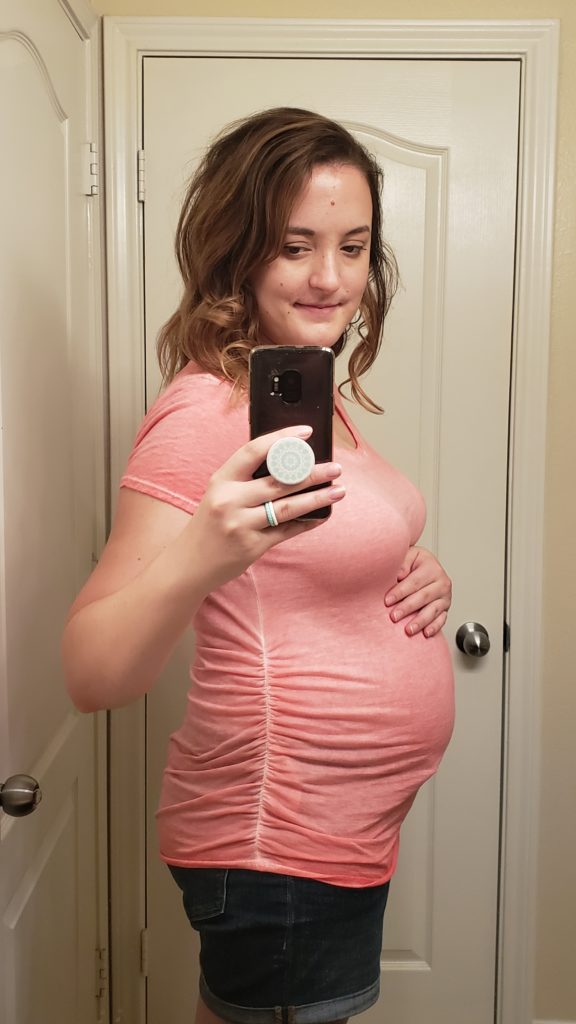 I’ve also been super thirsty and can’t seem to drink enough to get rid of my dry mouth. I’ve had to sleep with a humidifier which helps, but I still can’t help drinking a ton. Which makes me have to pee about every 45 minutes, and I’ve been getting up 2-3 times per night. I finally gave in and bought a pregnancy pillow

(which takes up more than half of our queen size bed) because  I was having bad hip pain while sleeping. The pillow has basically eliminated that and I’ve been sleeping better.

We’ve begun collecting a few random baby items– I have a bottle warmer (that I got on sale on Amazon prime day), thermometer, nursing pads and some outfits. Once we get into September/October  I think we’ll start buying most of the other stuff that we have on our registry that we don’t get from any baby showers. We won’t be setting up a nursery because we’re currently in a small apartment (which brings me to my next big news below) and there’s absolutely no room for a nursery. So we’ll set up the bassinet in our bedroom, a changing pad in the bathroom, and the rocker in the living room and call it a day.

Which brings us to the next big news– we’re building a house! Nick and I started looking for a house this summer back in Dallas (he just started a new job in Dallas, and we’re still living in Fort Worth). We couldn’t really find anything that we liked that was also within our budget. The houses seemed old and needed a lot of renovation and were pretty far away from Nick’s job. We finally stumbled across Wylie, which is 30 minutes north of downtown Dallas and pretty central to our friends and family. So we’re building a house in Wylie! It’s going to take about six months, but it should be ready by the end of January. We are SO tired of living in apartments and living in Fort Worth. We’re so ready to have space (we will have over 3x the space we have now) and to be back by our friends and family.

We’ve chosen all of the options for interior and exterior which was fun! Inside, we’ll have a light brown/gray ceramic wood tile floor, french doors on my study (!), grey walls, white kitchen cabinets with white/gray granite and white subway tile back splash, a white limestone fireplace, vaulted ceilings, and so much more. I don’t know what I’m more excited for: the house or the baby (hehe kidding… of course it’s the baby…).

For those of you following along on Instagram, you may know that Link hasn’t been feeling well lately (our 4 year old schnoodle). He’s been throwing up about once a week for the past 3-4 months and we finally took him in to get evaluated instead of chalking it up to him just having a sensitive stomach. After many, many rounds of tests (and a ton of money…) we are finally getting some answers. A sonogram showed that he has an abnormally small liver and kidneys and that he may be having some issues with those organs working properly. It might have been a result of a toxin or insult back when he was a puppy, but I can’t remember him being that sick when he was younger. It could also just be congenital, meaning he was born this way. Either way, we have to switch him to a kidney friendly dog food and keep an eye on him for worsening symptoms.

It’s been really rough seeing him sick and not feeling well. We really do consider him a major part of our little family and we love him more than anything. Nick and I joke that we love him so much, will we love our daughter this same amount? Hehe, I know the answer will be yes. But seriously, I never knew I could love a little animal as much as I love him. It’s been stressful and I’ve been really emotional being pregnant and having to deal with this all at the same time. But the good news is that it’s not something terminal, like cancer, and it’s something we can deal with and hopefully he continues on to live a long and happy life.

That’s all the major things! I took today off and am getting a prenatal massage and a pedicure. On Sunday, we’re having a get together at my parent’s house. It’s my Grandpa’s birthday on Sunday and since our birthdays are so close, we enjoy celebrating together. :)

Next weekend, Dixya and I are teaching a hands-on summer salads cooking class at the Dallas Arboretum. If you live in area we’d love to see you there! Tickets are on sale now.