I may just quit my day job to become a party planner. I had so much fun planning a bridal shower for one of my best friends from high school! Erin and I have known each other for over ten years. We met our freshman year of high school and have been through so much together!

I pretty much planned the entire thing from Pinterest. We both had a good laugh that I have fifteen different wedding category boards with probably over 300 pins collectively, and she’s the one getting married and she didn’t even have a wedding board when she got engaged, hehe. Checkout my bridal shower board with all the inspiration I used for this shower.

I designed the invitations on PicMonkey (with flower artwork purchased from Etsy) and had them printed through Vistaprint. They cost about $0.75 an invitation which is a HUGE bargain compared to sites like Mint.com, which charges anywhere from $2-4 per invite. 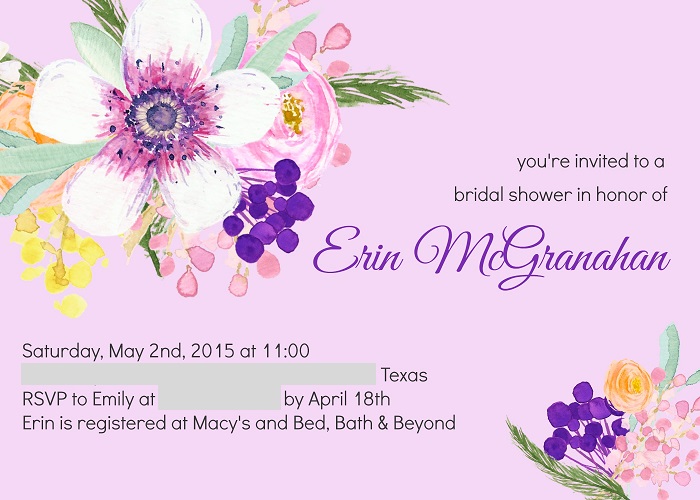 I started collecting things here and there from Hobby Lobby, Michaels and Etsy a couple months ago. Today I’m sharing pictures of the decor, food and fun! 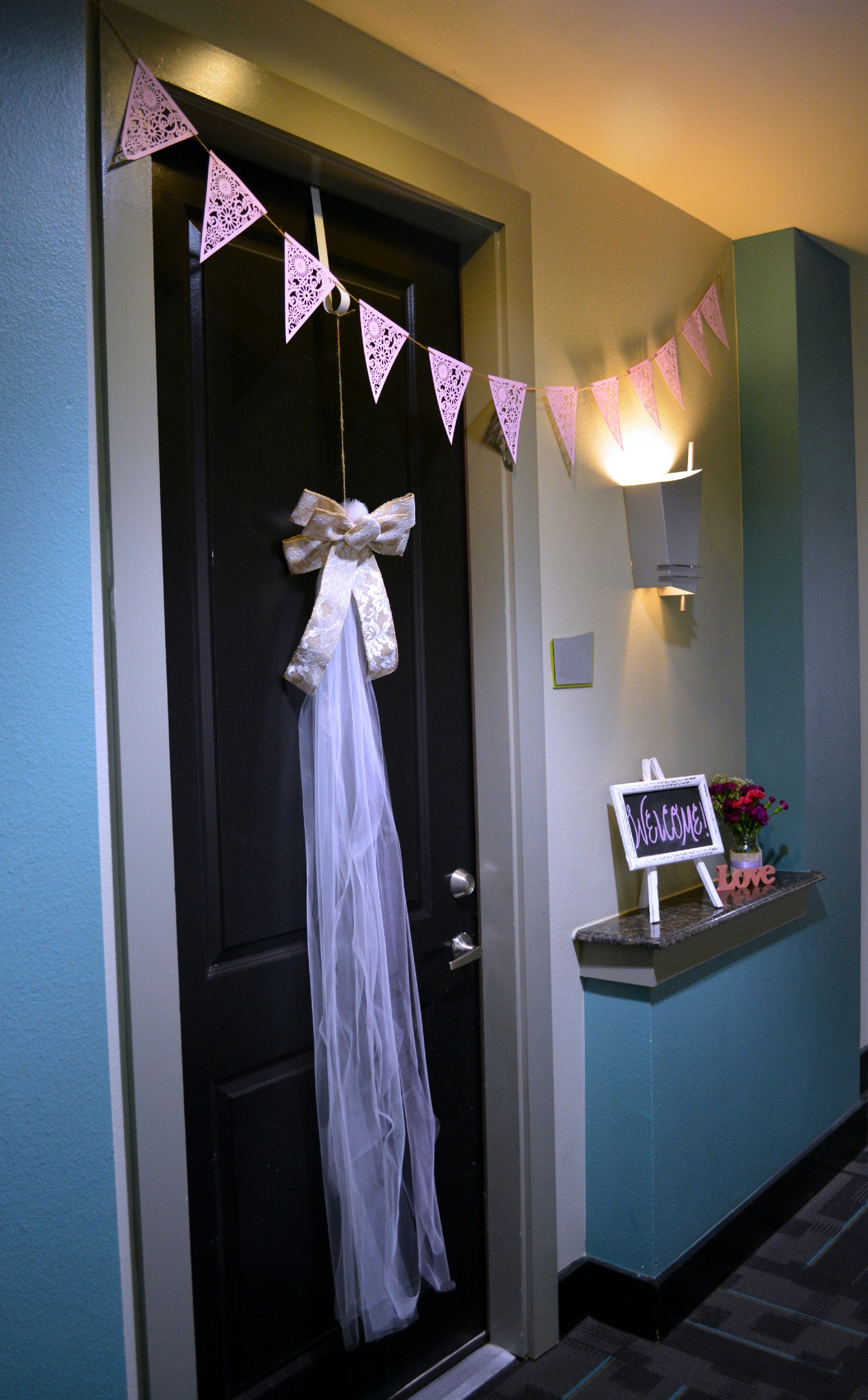 My sister came over the night before and helped decorate and cook! I couldn’t have done it without her. Or I could have, except it would have taken me two days! We had so much fun– we shared a bottle of wine, Panda Express, and watched Say Yes to The Dress. Girl’s night!

I found some great paper lanterns and crepe paper puffs at Michael’s (Martha Stewart brand) and Party City. We hung them up with twine with clear tacks that went into the ceiling. We crossed our fingers that they wouldn’t fall down onto guests and they didn’t! 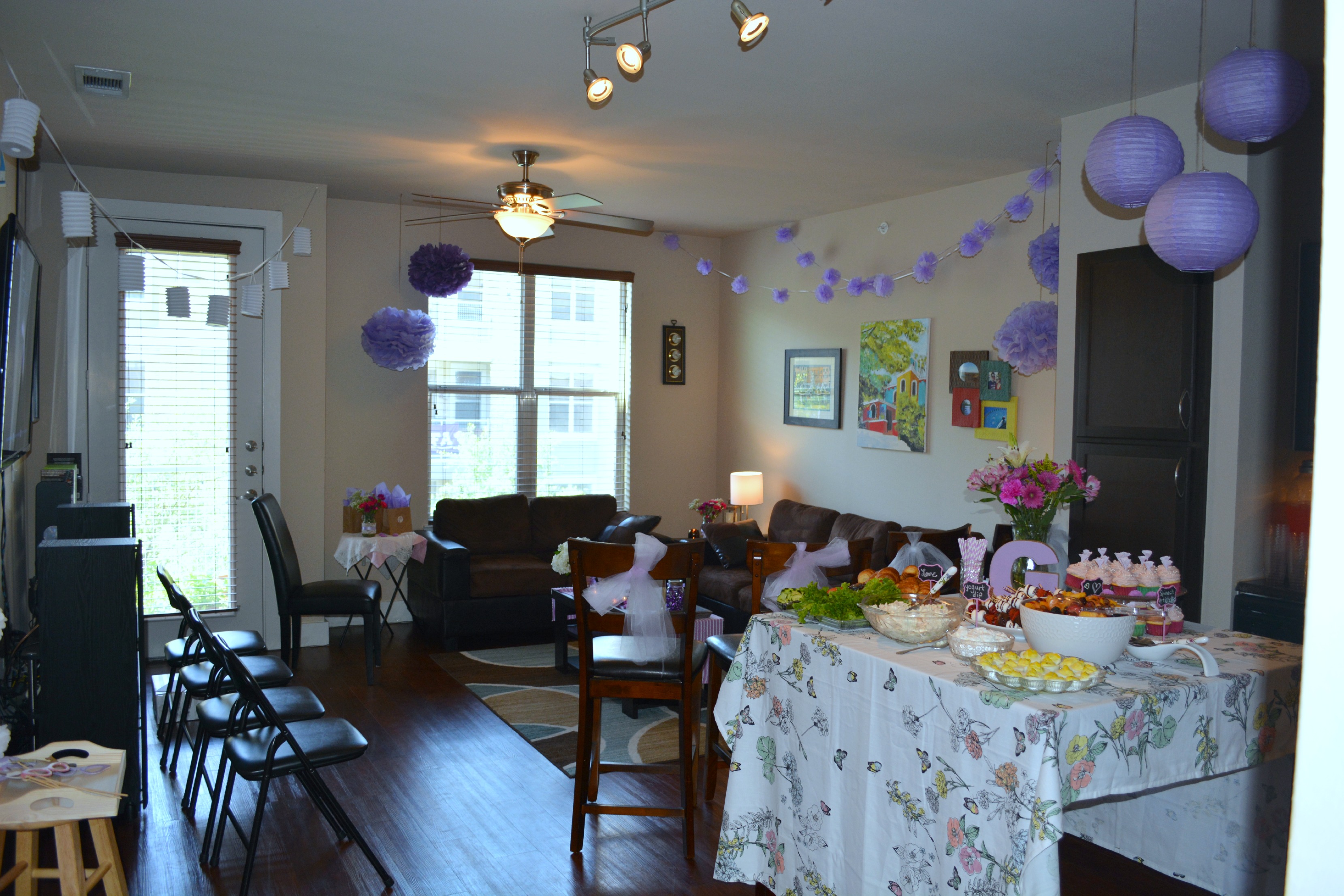 I got this great floral tablecloth at Kohl’s for $14. Such an awesome deal and I’ll be able to use it over and over again! 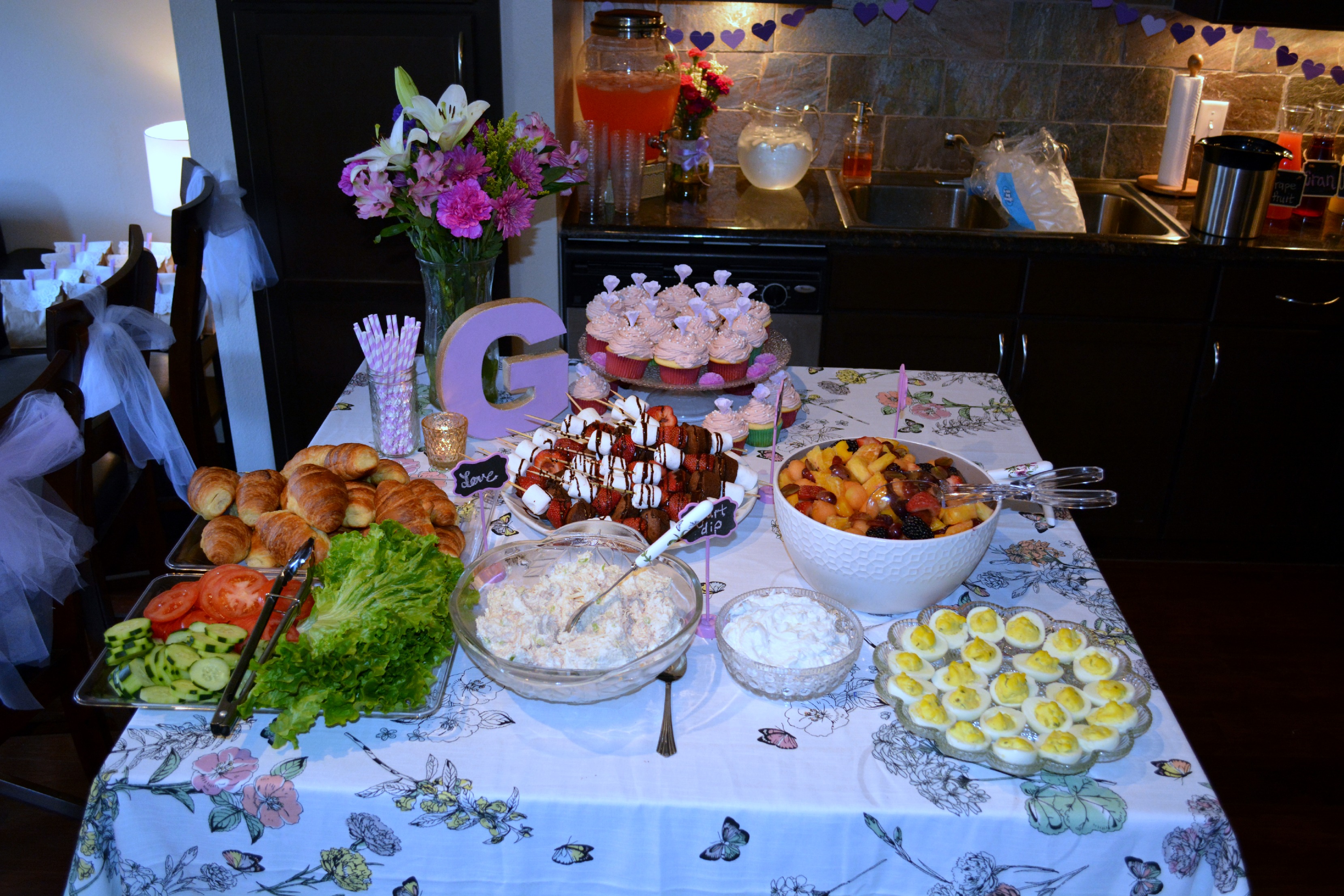 I was really happy I could use some of my Oma’s fancy glass bowls and plates. They’ve been collecting dust in my cabinets because I never throw parties! 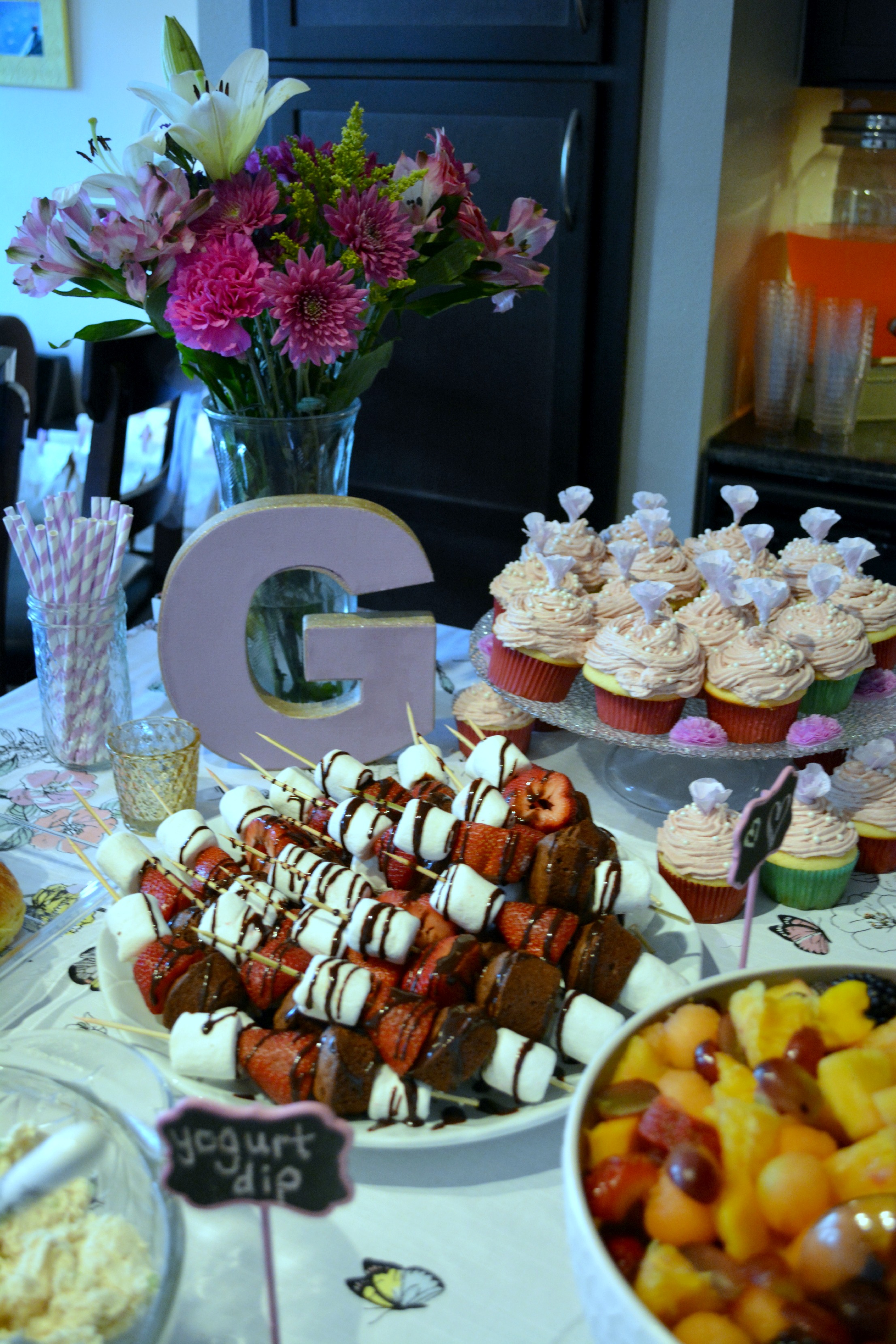 My favorite thing about the cupcakes were the white pearl sprinkles and these lavender paper flower cupcake toppers from Etsy. They were pricey but I didn’t really care because look how ADORABLE they are. I’m a sucker for anything romantic and pretty. I also bought the matching swizzle sticks for the mimosa bar.

I got the cupcake stand for $7 at Home Goods and that was a steal as well because everyone needs a cupcake/cake stand. 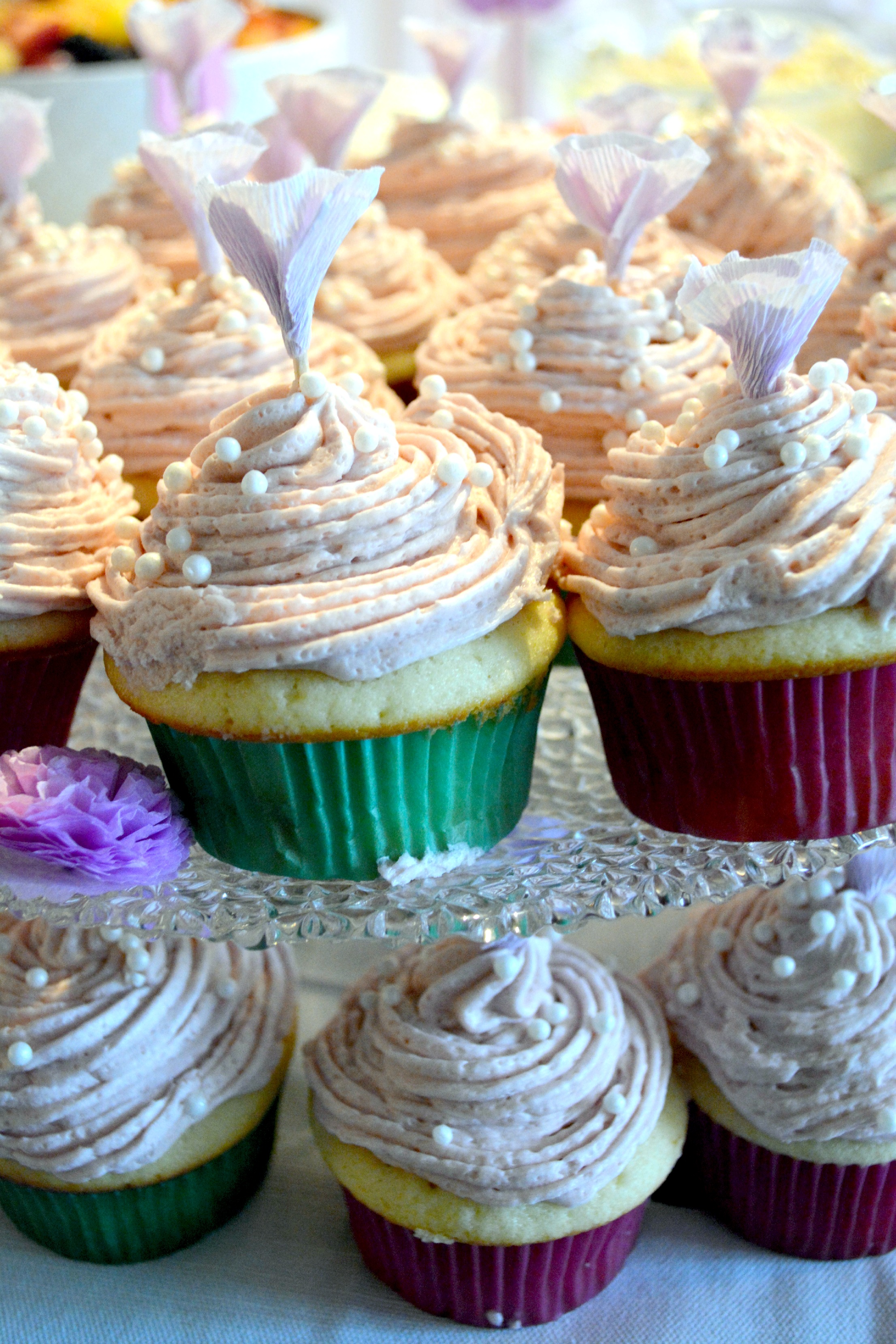 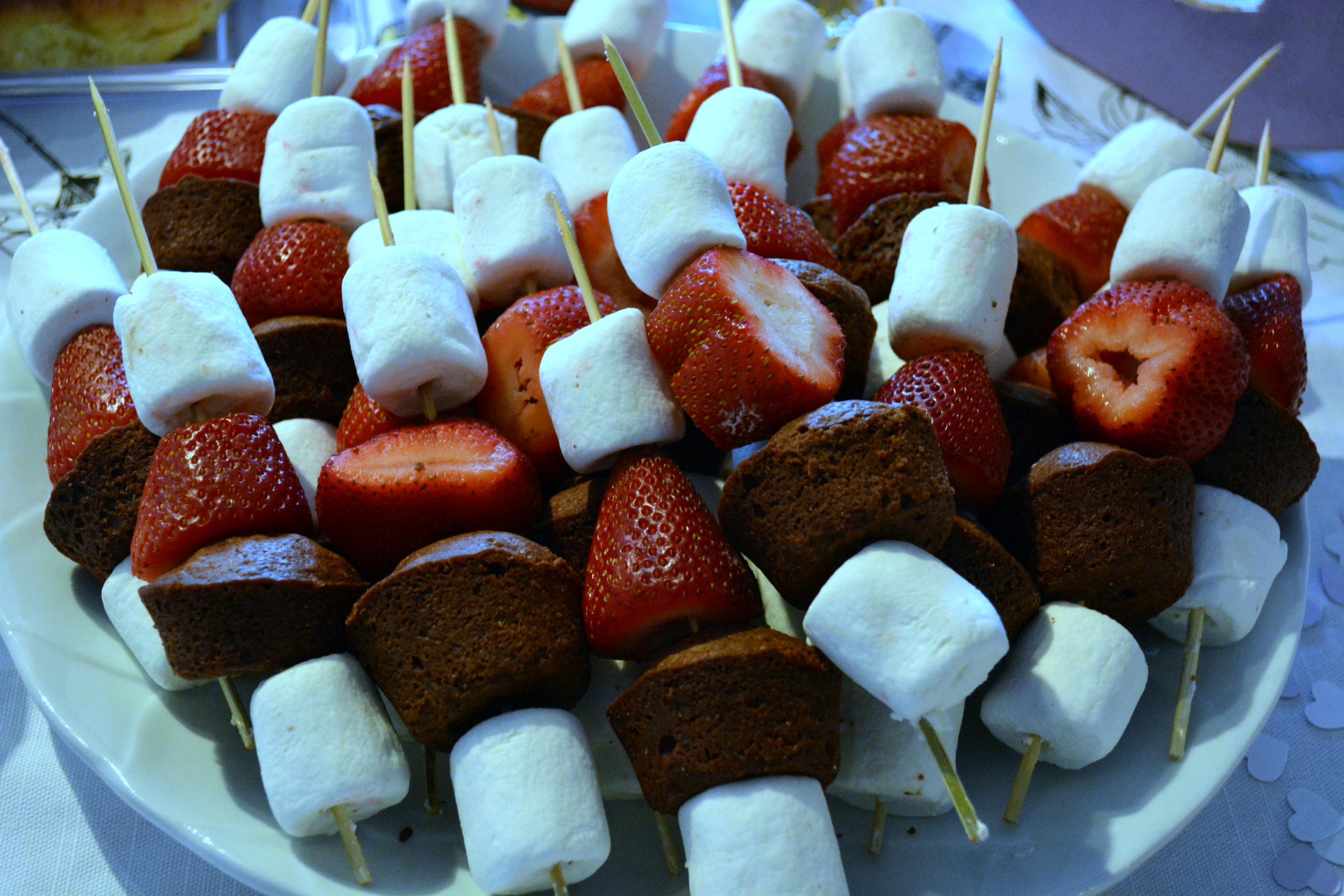 The mimosa bar was a huge hit! The most popular combo was the grapefruit with strawberries and pineapple. I made the sign on Canva and put it in a purple frame that I already had. The cute chalkboard signs are from Michael’s. Carafes and little bowls are from Party City. 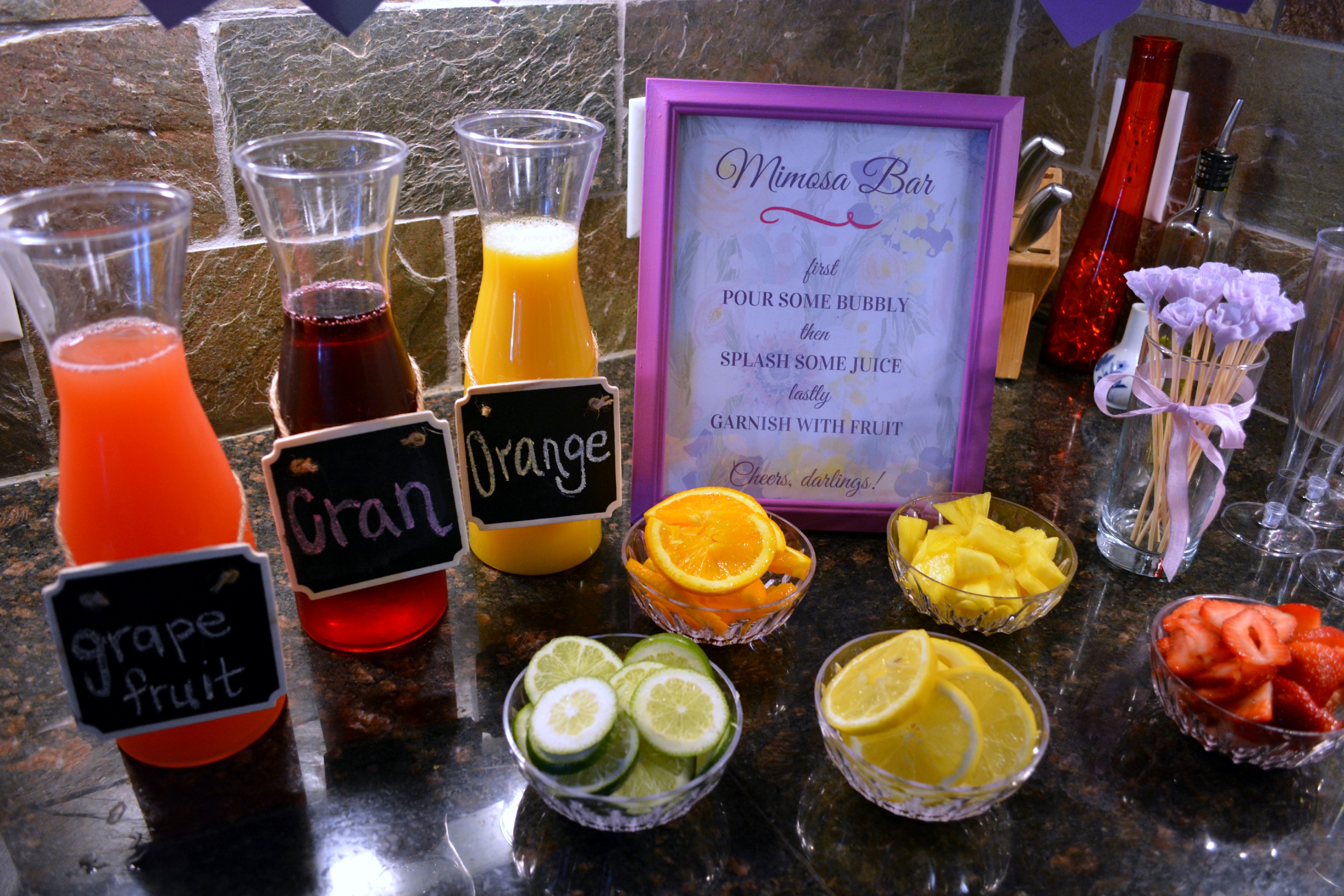 I had planned several games for us to play– the first was a “guess the kisses”. There were 124 kisses in the jar, and Erin’s mom won with a guess of 105! 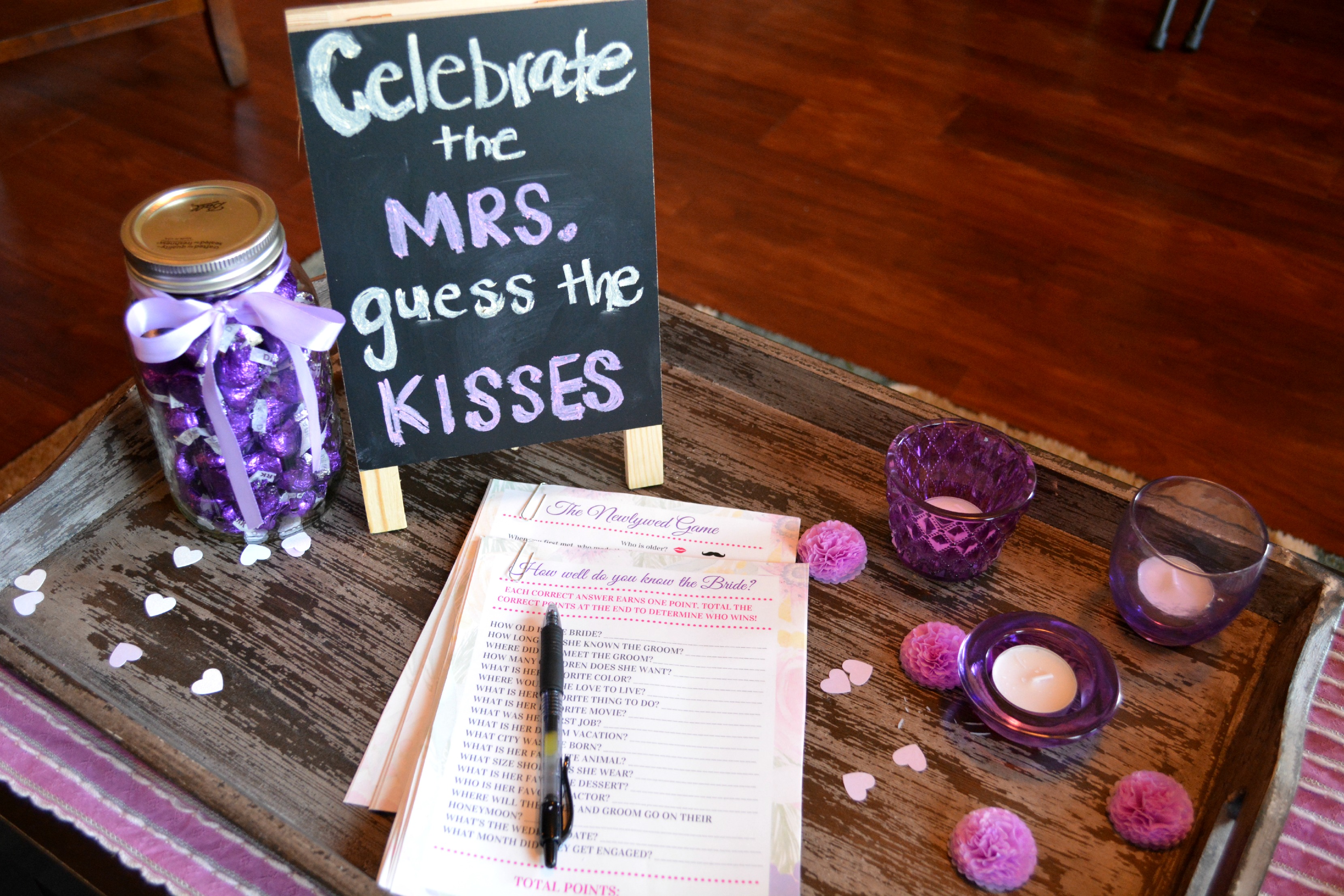 We also played “How well do you know the bride?” and “The Newlywed Game”, which had you guess whether the bride or the groom would do something. Everyone had a great time and loved arguing and laughing about all the different answers. Game prizes were these cute ring bowls from Etsy. 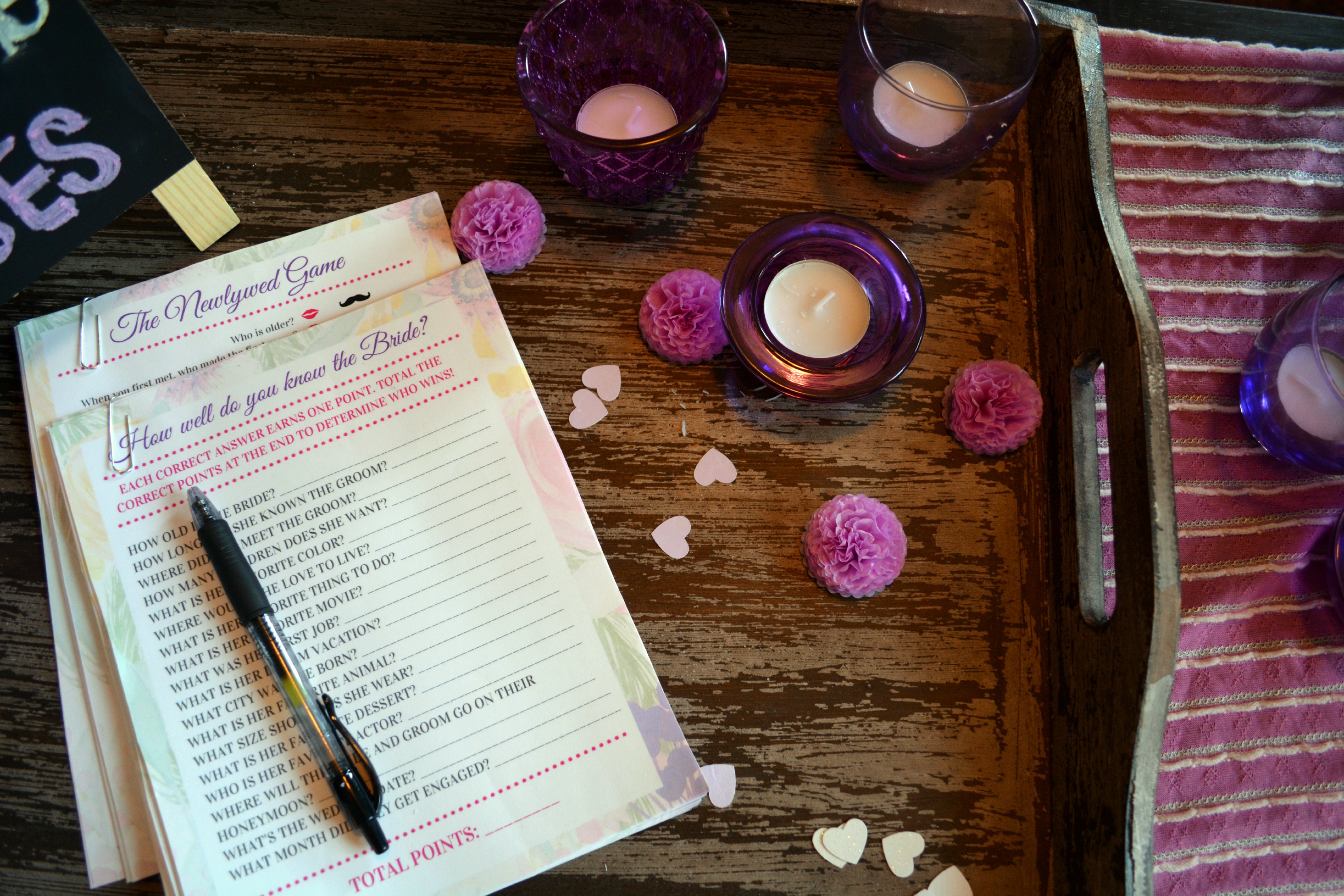 Those adorable little one inch button mums and heart confetti are from Etsy as well.

Here’s the cute couple! They’ve known each other for eight years, and met in high school as well. I made mason jar vases with burlap lace and lavender ribbon wrapped around them. 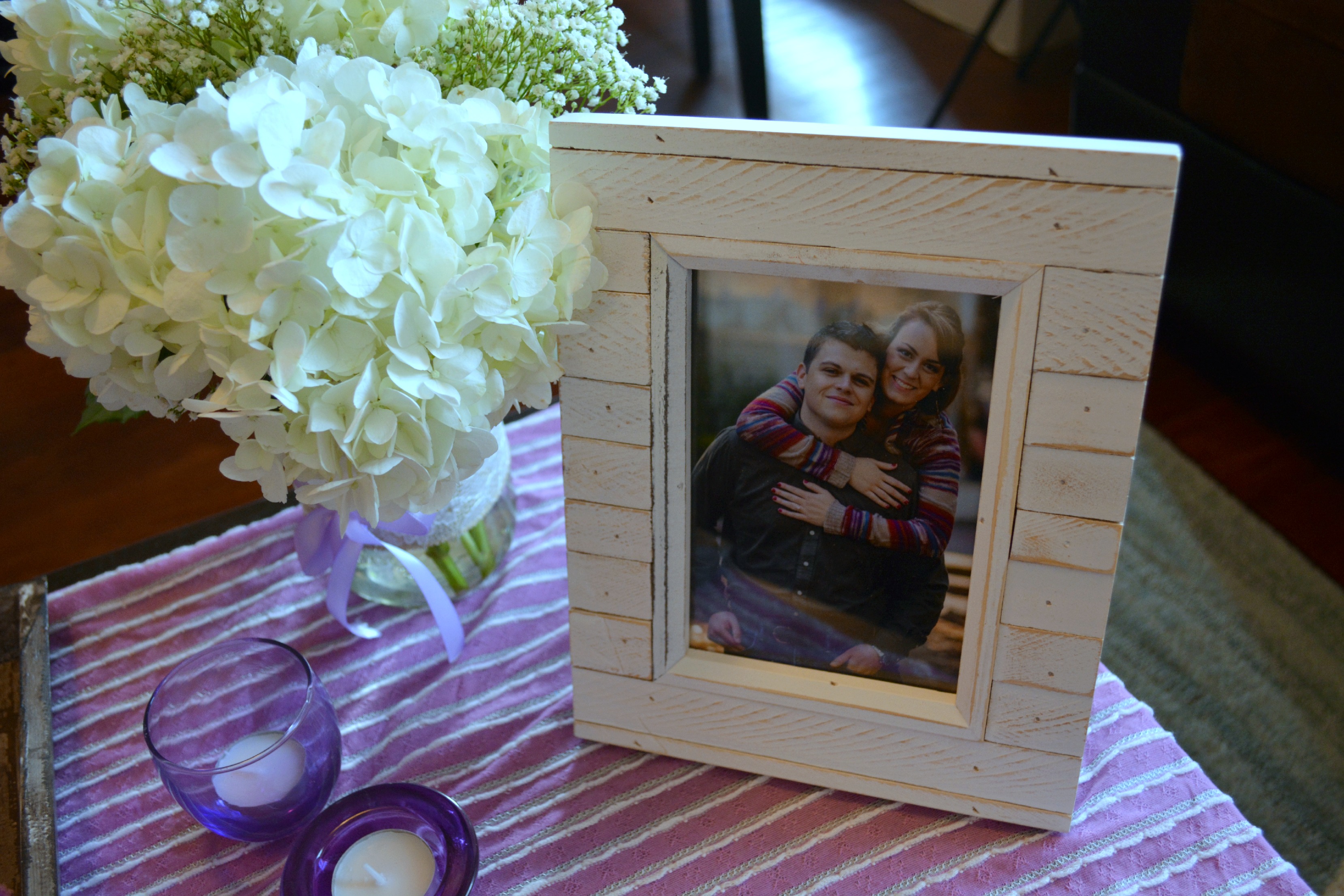 Side note: Hydrangeas are very toxic to dogs. I did not know this. Or else I probably would have chosen a different flower. Link jumped up on the coffee table and ate a petal and then proceeded to throw up three times in a row. We almost had to make an emergency vet visit! Luckily he started to feel better about an hour later after the incident. Phew.

For party favors, I made homemade lavender sugar scrub (granulated sugar, lavender body soap, and baby oil). I put them in little mini mason jars and tied them with a purple ribbon. I wish I had gotten pictures of those! The doilies and lavender clothespins are from Michael’s. 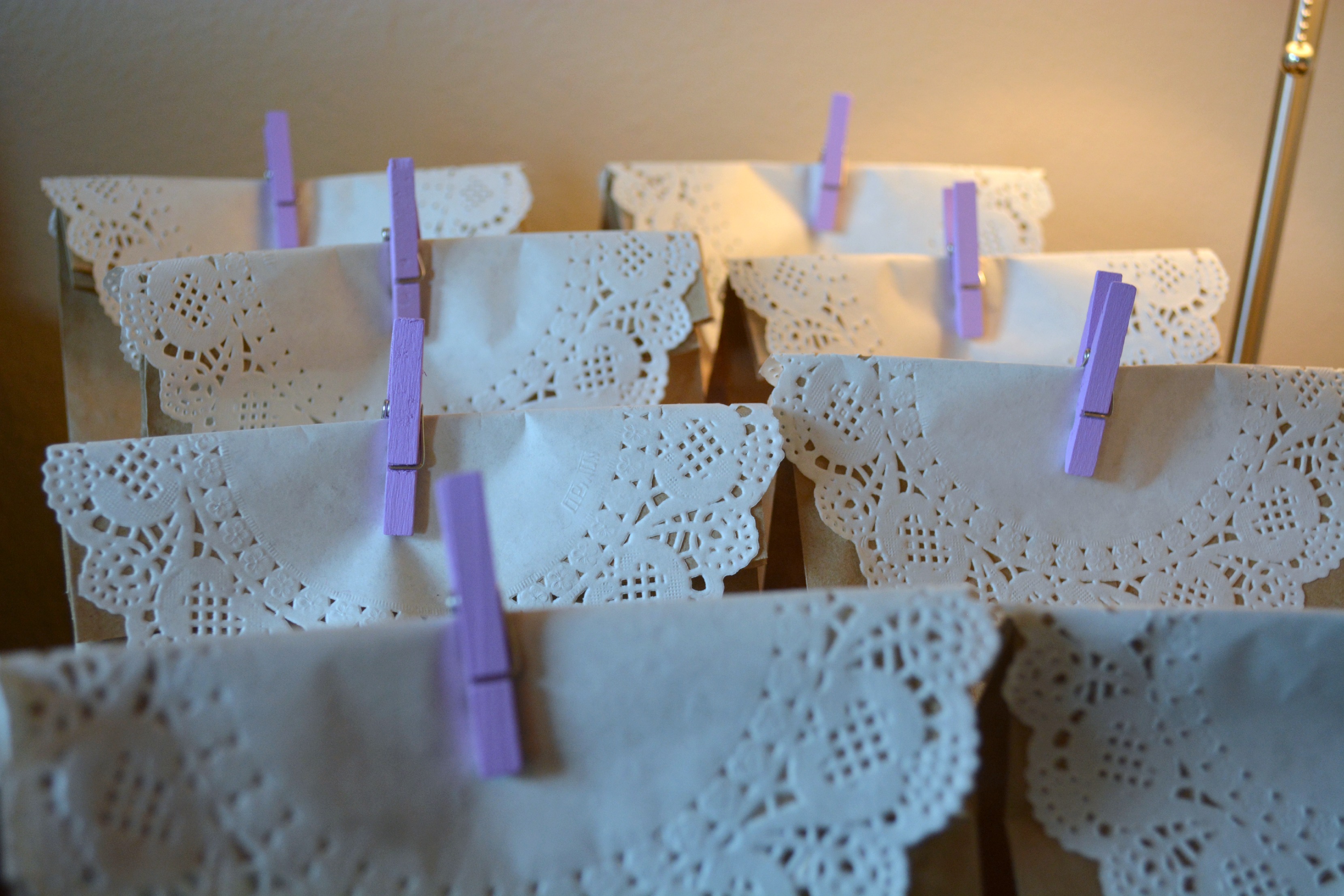 This was one of my favorite decorations: the photo backdrop! Erin’s one request for the shower was to have a spot for everyone to take pictures in front of. I bought some yards of white cloth and light pink chiffon from Hobby Lobby and pinned them up with clothespins and clear tacks on the wall. I draped a Bride to Be sign from Etsy and white poms from Party City. 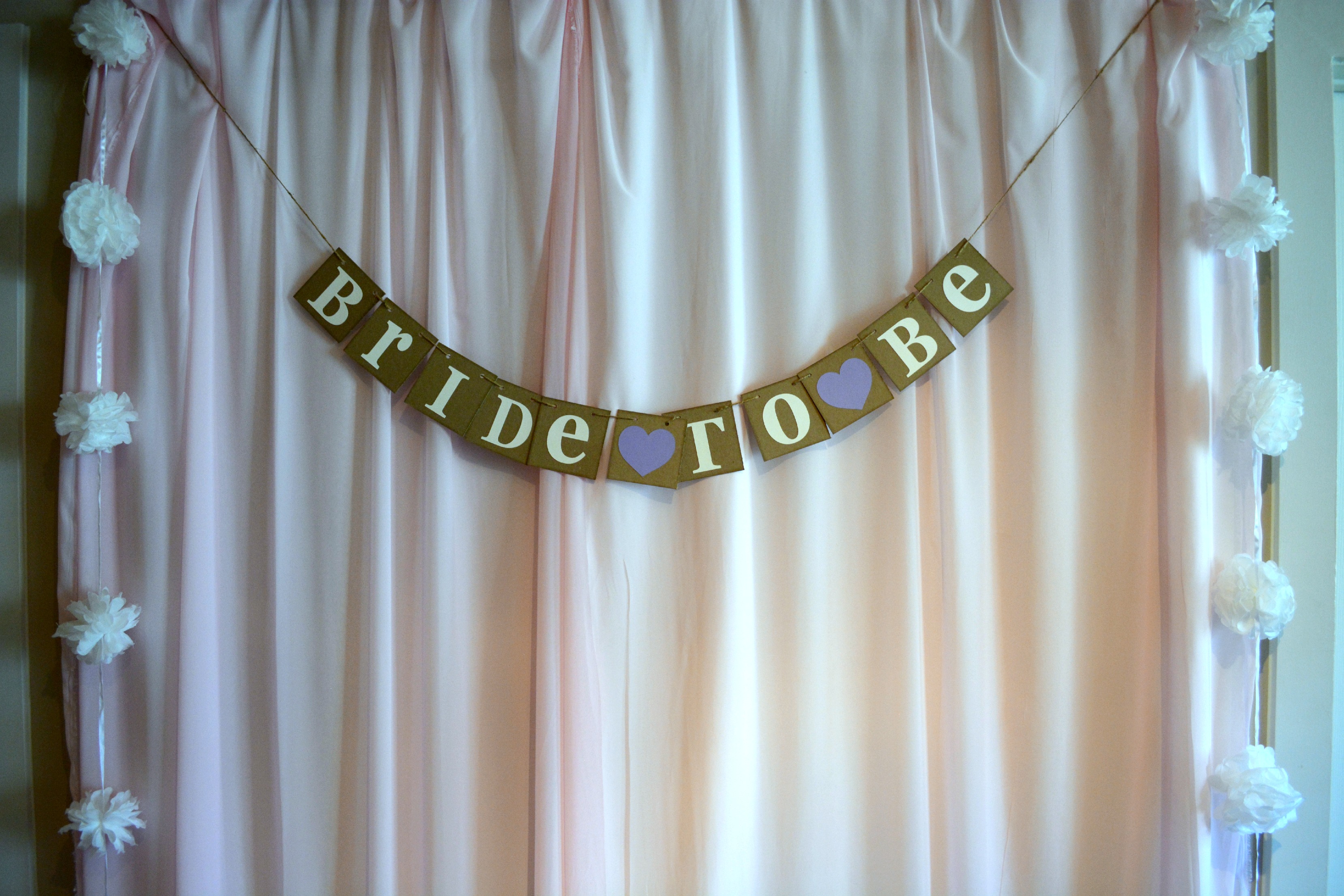 Everyone had a blast taking pictures in front of the backdrop! 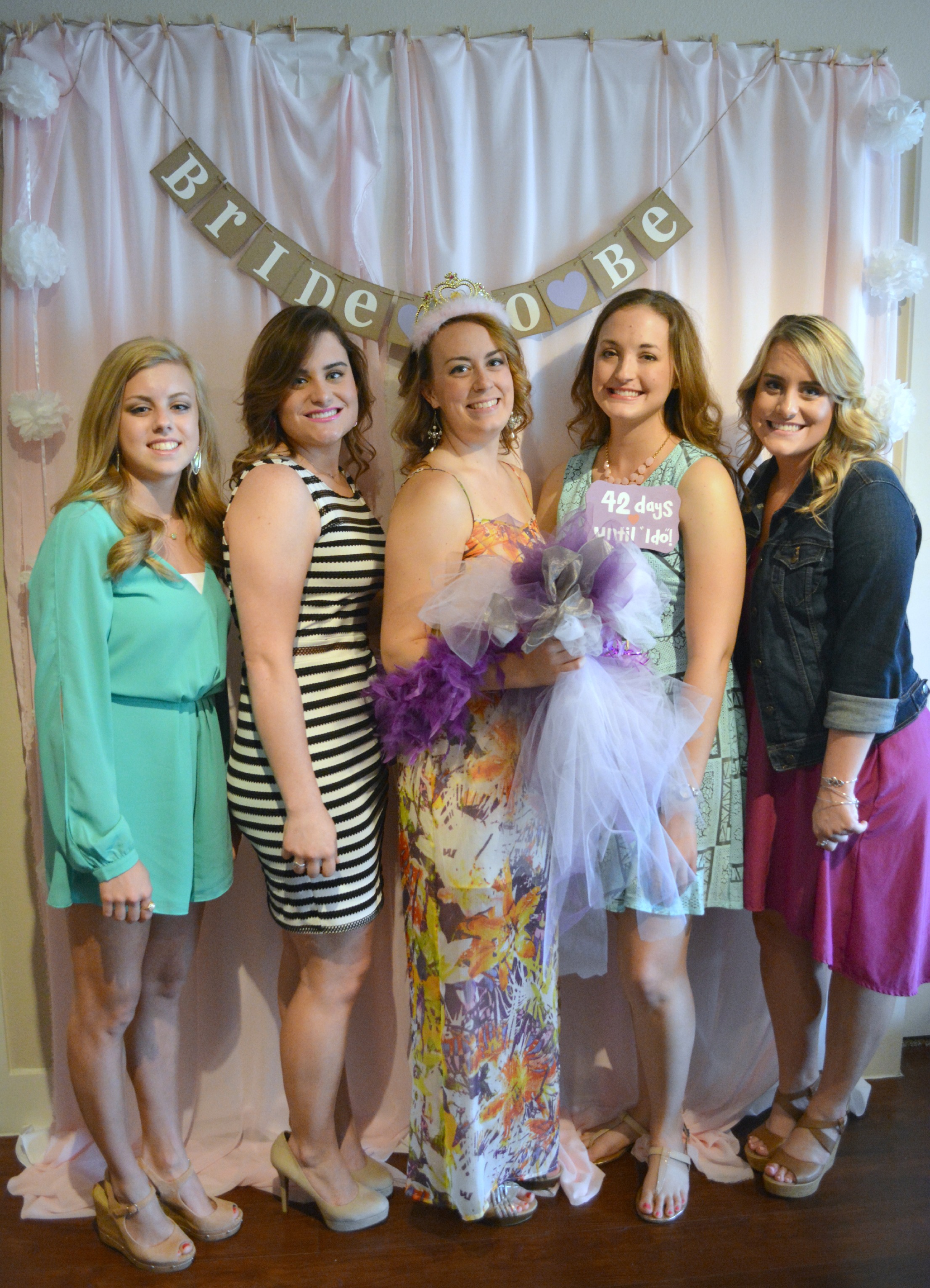 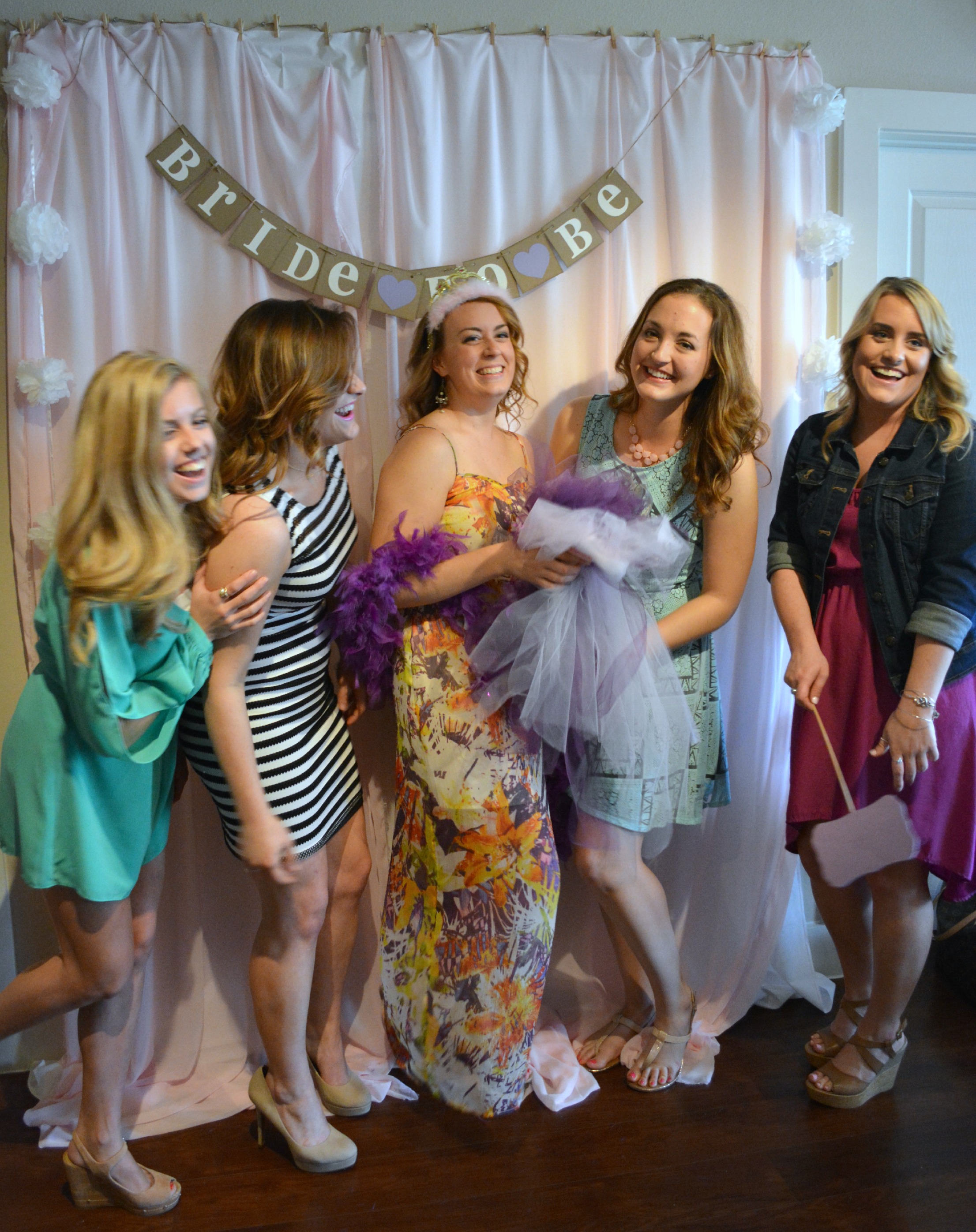 Success! I can’t wait until your wedding in 40 days, Erin! 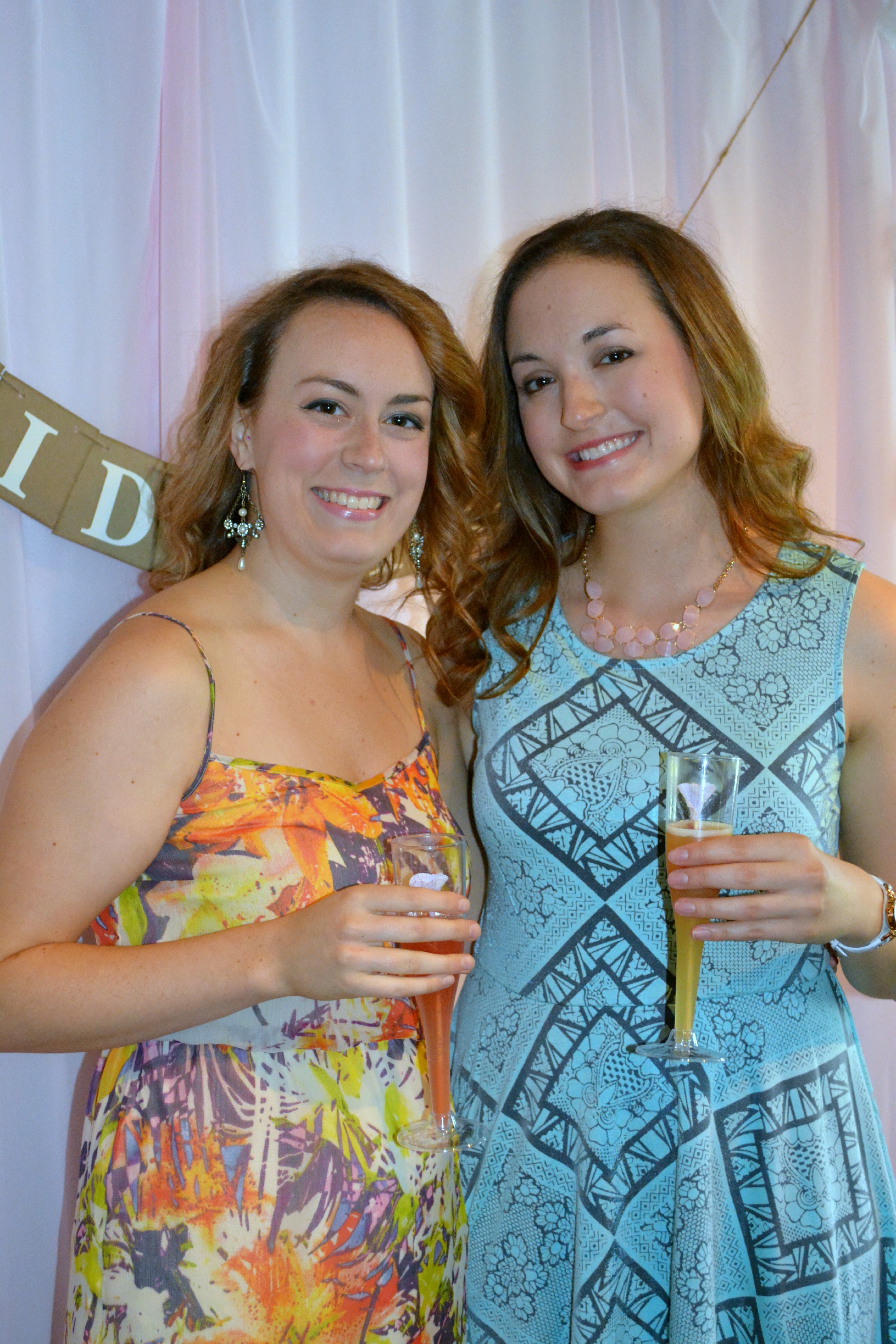 Have you ever planned a bridal shower?