Fresh beets are abundant at the grocery store and farmer’s markets this time of year. These pickled beets will last for weeks in the fridge and taste delicious! 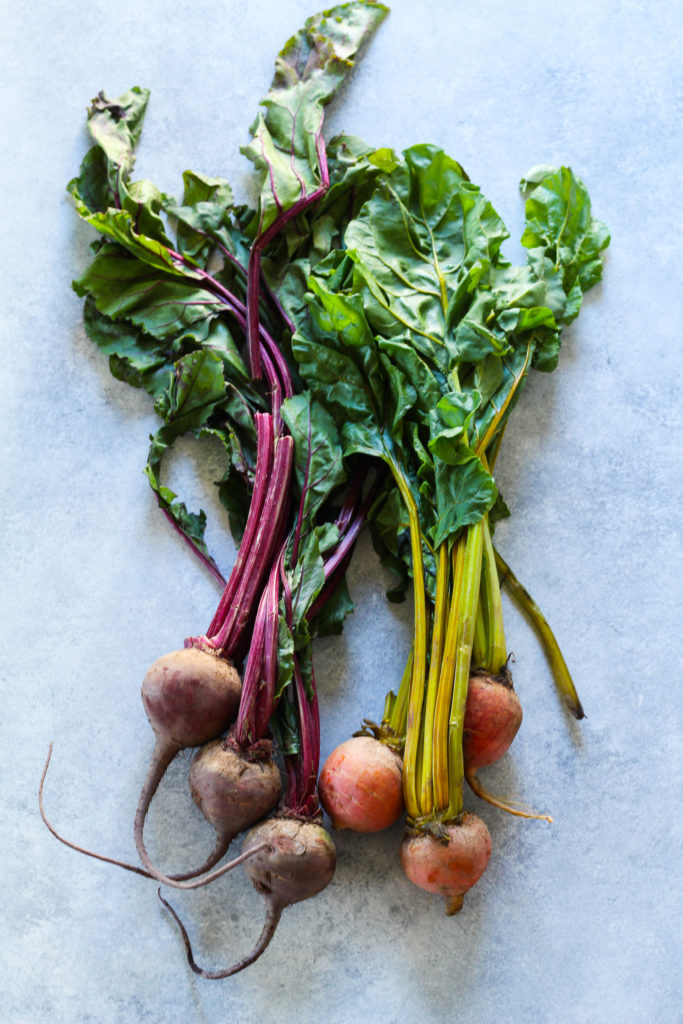 As a child, I loved pickled beets. My whole family did– we were the kids who would eat anything and everything. My mom would buy a can of pickled beets and we’d crack it open, add a sprinkle of salt, and eat the whole thing in minutes, our fingers stained red from the juice.

Up until fairly recently, all I’d ever had was canned beets. When I was younger it was rare to see fresh beets at the grocery store, but now they’re fairly common. Especially this time of year when beets are in season. Sprouts Farmers Market always has a great selection of red and yellow beets. 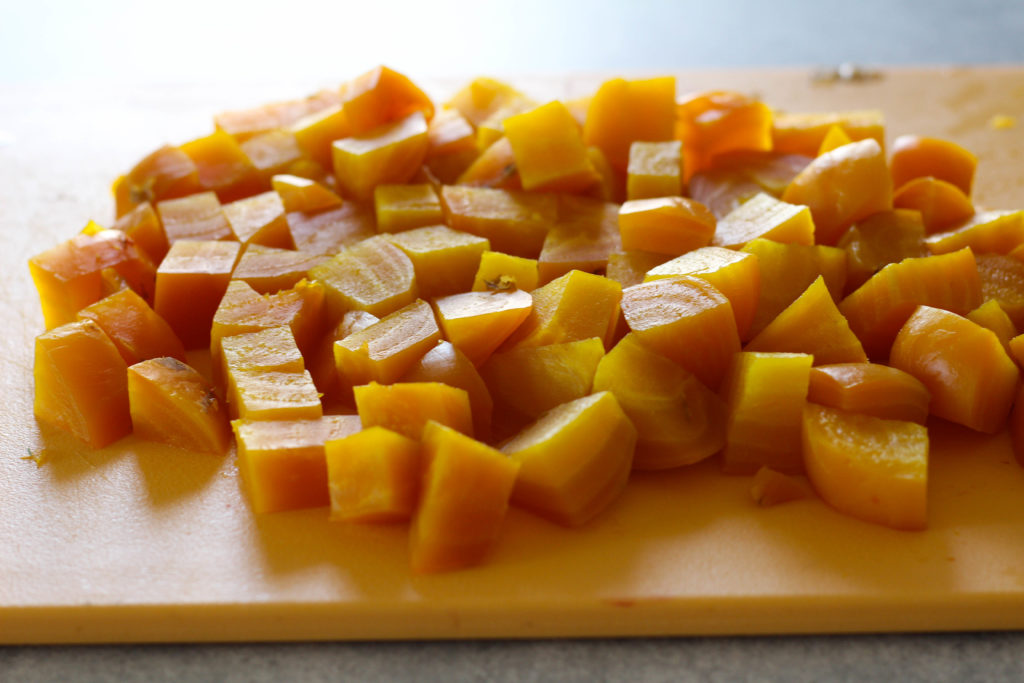 I couldn’t help myself the last time I was grocery shopping– beets are so beautiful with their bright green leaves and colorful stalks. Coming home with almost five pounds of beets, I needed a recipe asap.

My Dad had recently gone up to Oklahoma to visit my Oma and came back with a collection of recipes. He sent me a picture of a pickled beet relish recipe from an old Army cookbook (written for veterans!). At the end of the recipe, it says: “Beets are so good for you. They are not my favorite but I decided to try this this way and I liked them. The benefits are worth the effort“.

That really made me laugh out loud. I imagine an older Army wife in her kitchen writing notes down on her recipe book about how she’s trying to get herself to like beets for the health benefits.

She’s right — beets are really great for you. They’re full of phytonutrients called betalains, which are anti-inflammatory and anti-oxidants. Beets are also a good source of fiber for keepin’ things regular. 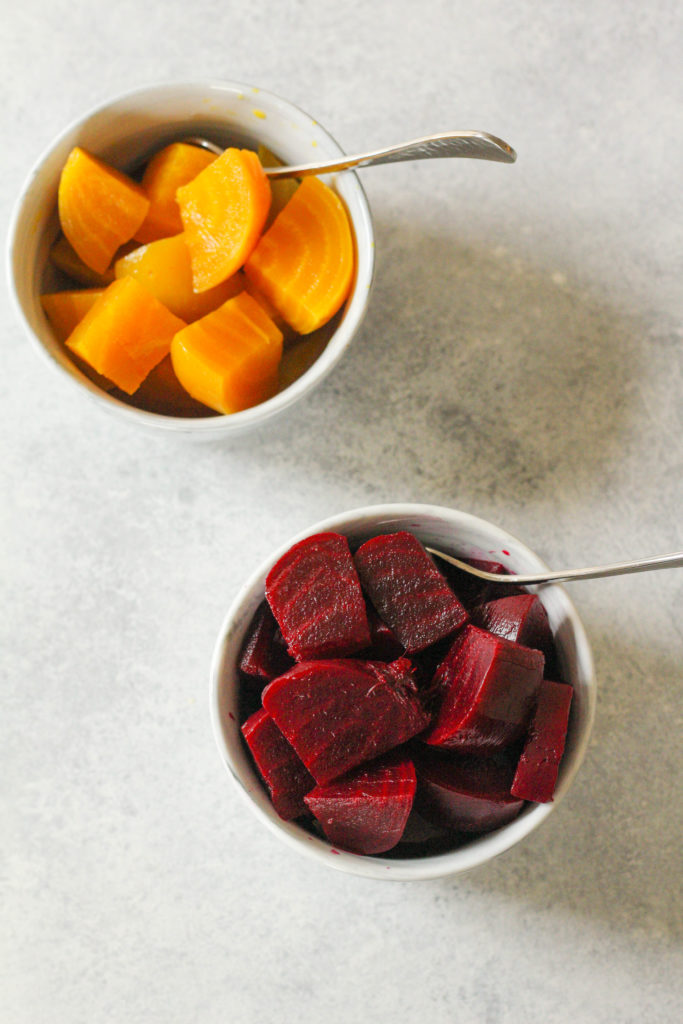 While canned beets are fine, they do sometimes contain more sodium than I’d like to see in a veggie. Pickling beets yourself reduces the amount of sodium and still allows you to enjoy the great taste of beets!

This is a more time-intensive recipe, but in the end, it’s definitely worth it. The part that takes the most time is peeling and dicing after cooking, but most of the time in this recipe is passive cooking (letting everything simmer together until the beets are soft). 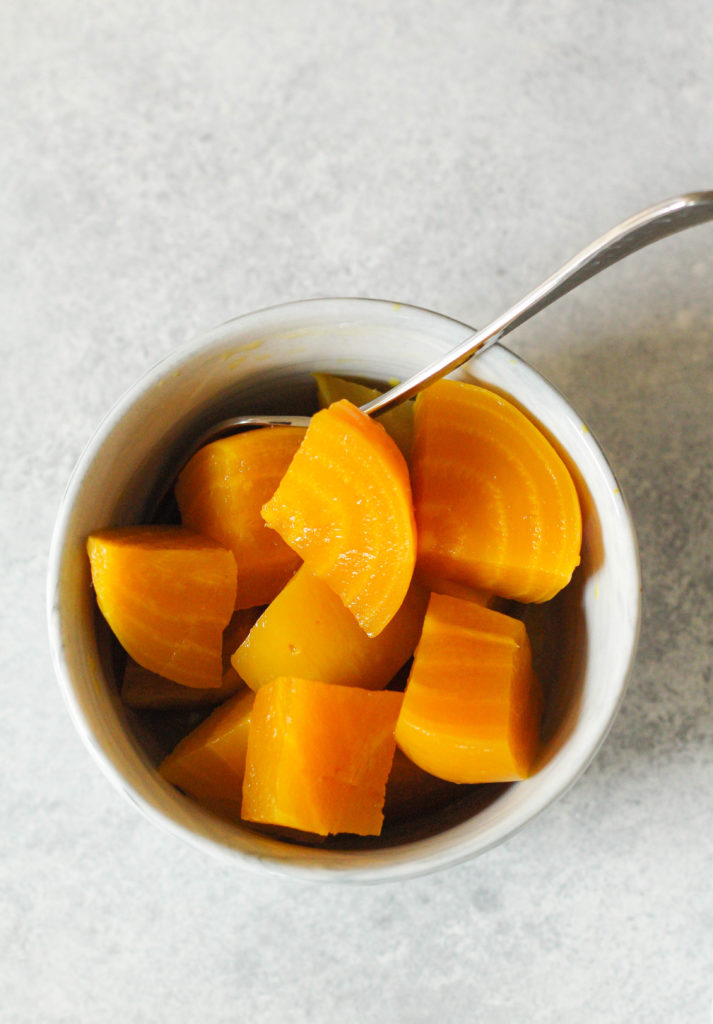 You can use this recipe for both red and golden beets — I tested on both! I think I’m more a fan of cold red beets and warm golden beets. But the golden beets still came out tasty pickled.

If you decide to use both types of beets, keep them totally separate or else the colors will run together (unless you don’t mind that your golden beets are now pink!). Another tip — wear gloves when peeling and dicing. The color from red beets is very strong and will stain your fingers (although it washes away in a day or two). This makes me think of the scene from The Office where Dwight goes to the mall after picking beets and his hands are stained red and he gets kicked out of the mall. 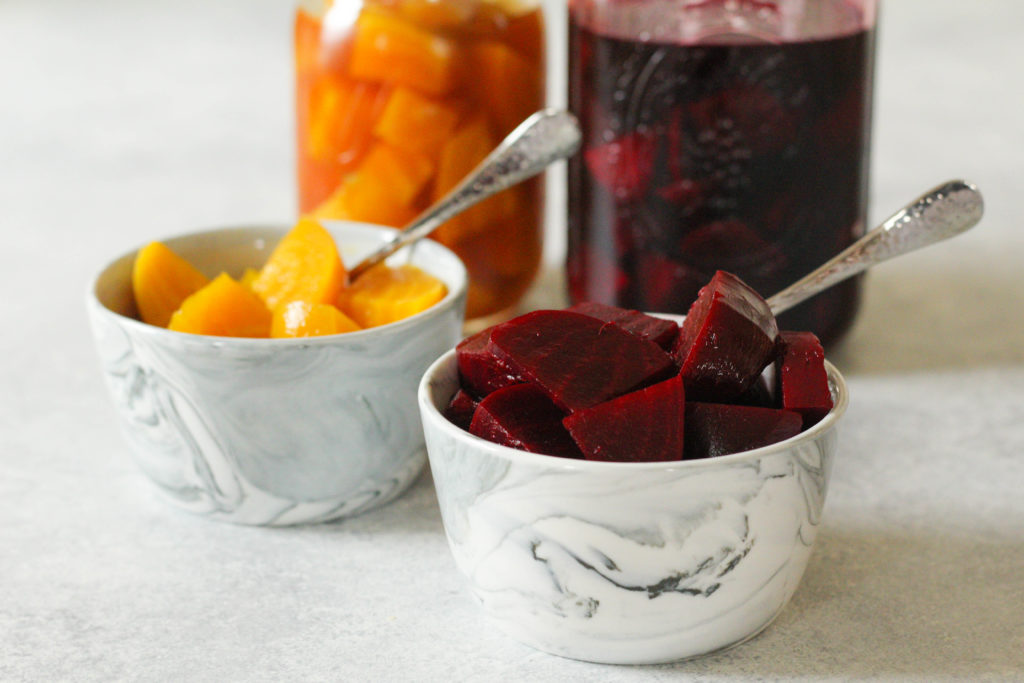 Anyway, I hope you get curious in the kitchen and try out this homemade pickled beet recipe! I used mason jars

to store the pickled beets in the fridge.

I also have a recipe for easy refrigerator pickles if you’re interested in those!

Fresh beets are abundant at the grocery store and farmer's markets this time of year. They may be beautiful -- but just what do you do with them? These pickled beets will last for weeks in the fridge and taste delicious!