What looked to be a beautifully arranged mixture of super-foods, didn’t live up to it’s hype and taught me an important lesson about Intuitive Eating.

As a major foodie, one of my favorite past-times is to browse the internet for new recipes. If I’m not careful, several hours can go by where I’m doing nothing but reading recipes for summer squash or articles describing five new ways to eat pasta. I recently stumbled on a recipe for a farro salad with roasted sweet potatoes, kale and pomegranate seeds. The photos were breathtakingly beautiful. There’s something about a perfectly arranged plate full of super foods that makes my dietitian heart skip a beat. 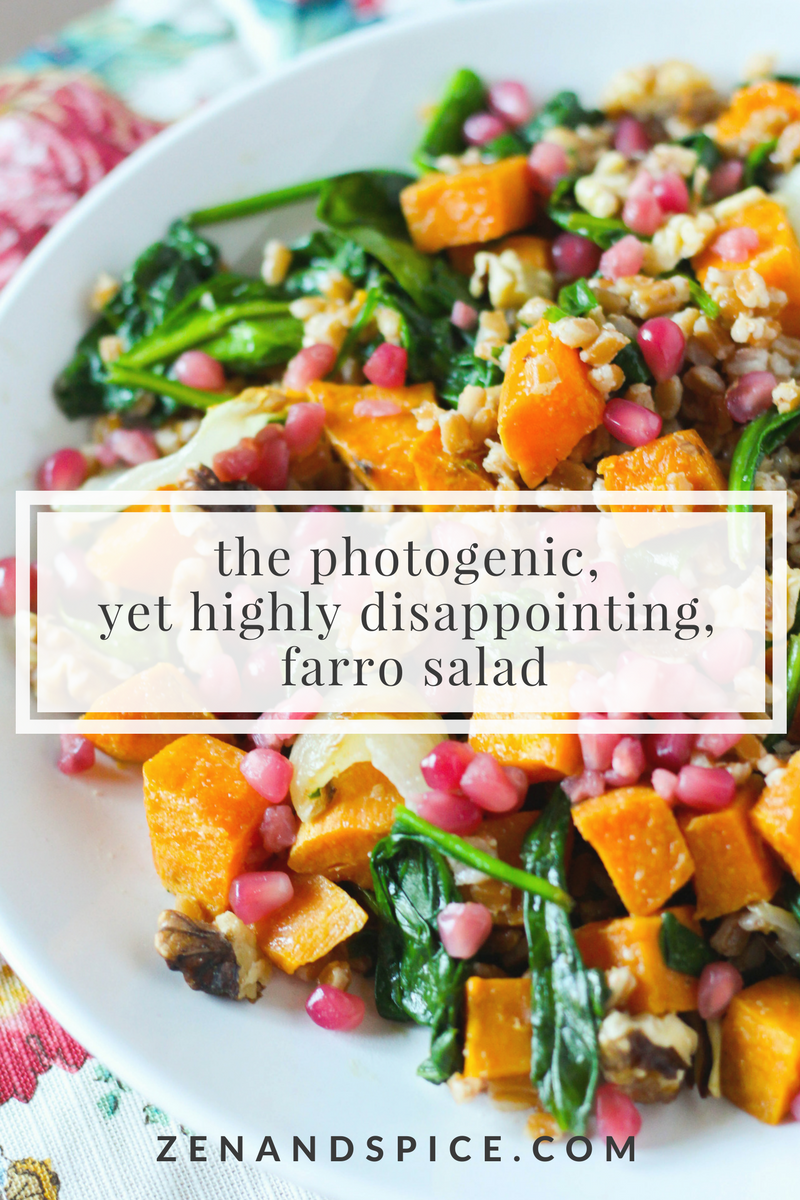 When I found this recipe, I already knew I wasn’t a big fan of farro. My husband, Nick, had never had it before, and turns out that this was a bad recipe for a farro virgin. But, I thought, it’s a fiber rich grain and look how pretty it looks in the photographs!

The recipe called for cumin (neither of us are big fans), sweet potatoes, lemon juice, onions, spinach, and walnuts. The sweet potato, onions and walnuts all had to be diced into tiny pieces and roasted individually for different times which was a lot of work. I also had to seed an entire pomegranate which is messy and bothersome in itself, is almost not worth it.  All while keeping an eye on the pot of farro bubbling away on the stove top. 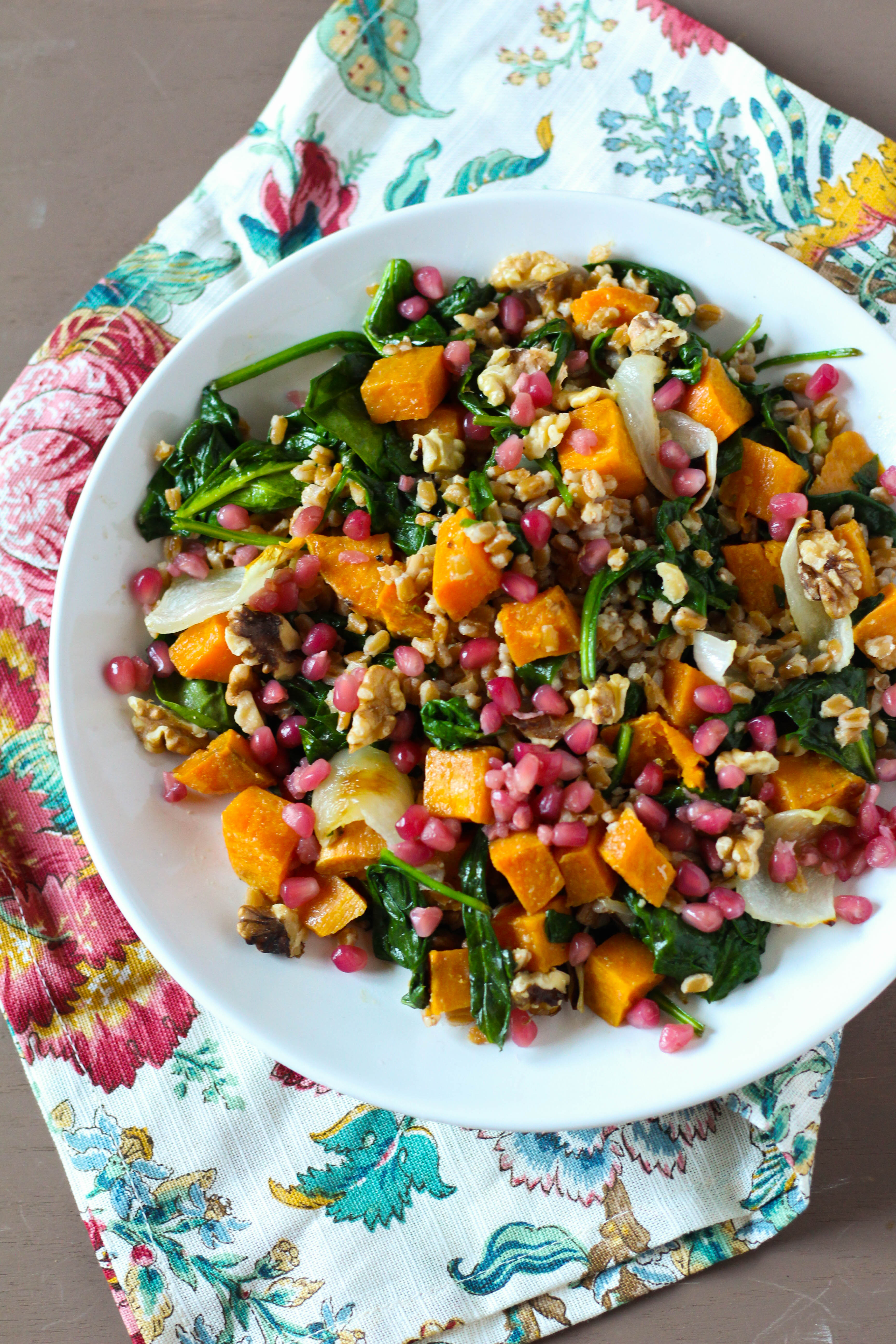 I realize that sometimes healthier dishes take a little more elbow grease to get on the table, but this was ridiculous. Too many steps and too many different flavors and ingredients. When I finally finished (almost an hour later), I took Nick a plate. He looked down, then looked back at me. Apprehensively, he took a bite.

“I feel like I’m eating pebbles and dirt that I had to forage from the forest.”

After taking a few bites myself, and the earthy taste really got to me. The farro was too crunchy and the cumin was overpowering. I just tried to eat the little roasted sweet potato cubes, but again, too much cumin. I felt bad for the poor, wasted pomegranate seeds. Usually my favorite fruit, they were now covered in onion juice and cumin.

I decided to take this cooking disaster and turn it into a lesson. Just because a recipe contains a handful of “super foods”, whole grains, and is packed with veggies, doesn’t mean it tastes good. When you jam pack a smorgasbord of flavors and textures together like this, it’s too much. I knew I wasn’t a fan of cumin, and that Nick doesn’t like his spinach sautéed. I knew that farro wasn’t my favorite ancient grain. But I forgot about all of that when I saw how “healthy” and “nutrient packed” this dish was.

It’s important to know which foods you enjoy, and to eat them often. When you force yourself to eat things you know you don’t like (or you’re just eating it to be “healthy”), you end up feeling unsatisfied. This leads to craving foods you do like, and then the likely overeating of those foods.

You want to know what we did after attempting to eat the forest salad? I made a giant pot of macaroni and cheese. I had to use lasagna noodles because that’s the only thing we had and sliced them into little pieces. I whipped up a quick roux with milk, butter and some cheddar cheese and tossed everything together with green beans from the freezer. And you know what? It was delicious. 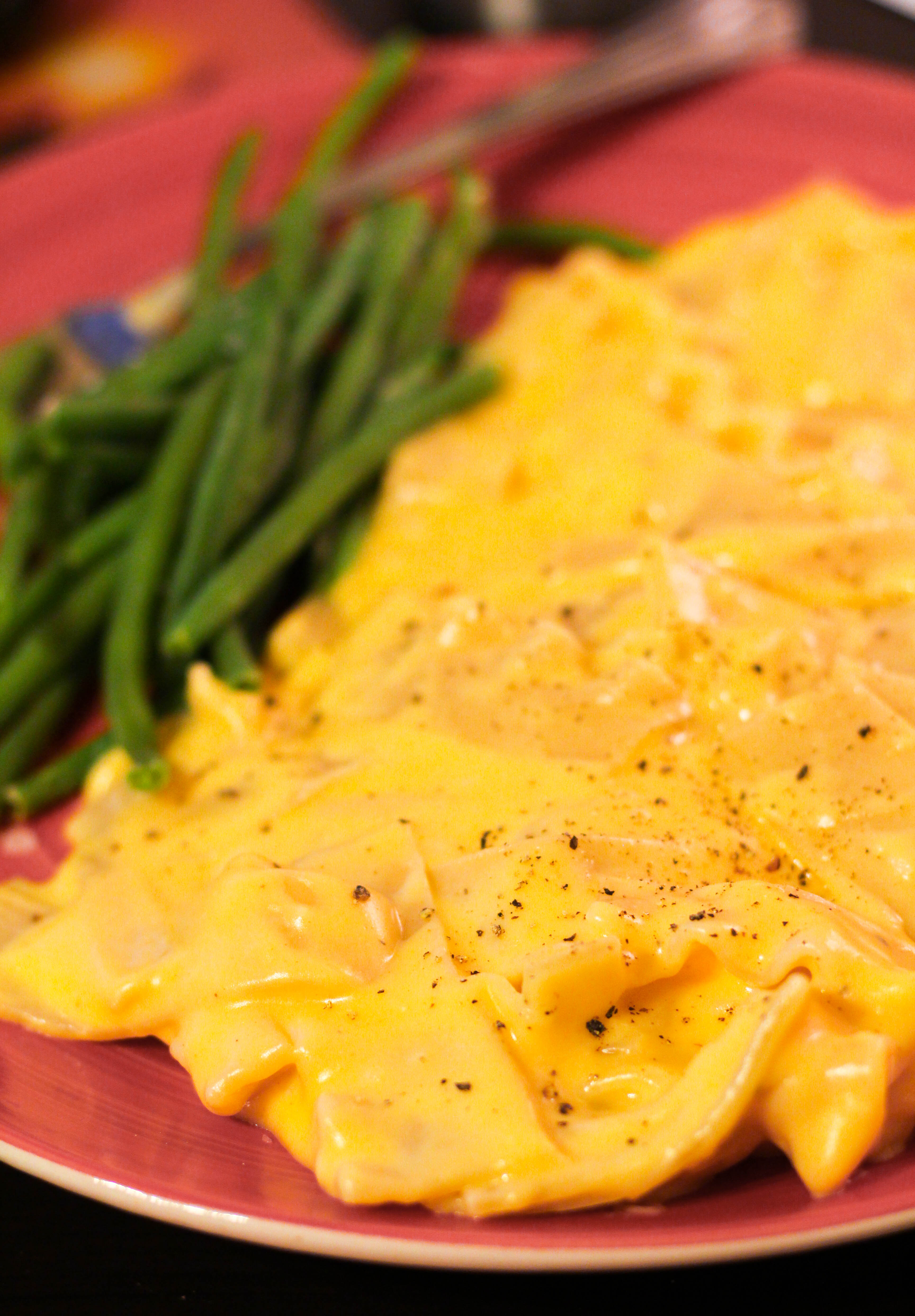 We ended up probably eating more of the mac n cheese than we would have if we hadn’t had the horrible farro salad beforehand—we created an emotional hunger that only macaroni and cheese could fill. Because not only were we still physically in need of sustenance, we weren’t satisfied. See how it works there?

After this recipe disaster, I took a break from posting recipes on my blog. I swore to myself that I would never post a recipe that I didn’t absolutely love and that didn’t satisfy our taste buds. And maybe I’ll narrow my internet searches to more Nick-approved ingredients.