Create an entire barbecue dinner using just two baking sheet pans in under an hour! This recipe utilizes a stair-step method, meaning once the first item is in the oven (chicken), you’ll prep the second item and place it in the oven (and so on).
Fresh corn on the cob, tender buttery baby potatoes, roasted zucchini, and bell pepper pair deliciously with bourbon barbecue sauced wings and sausage. 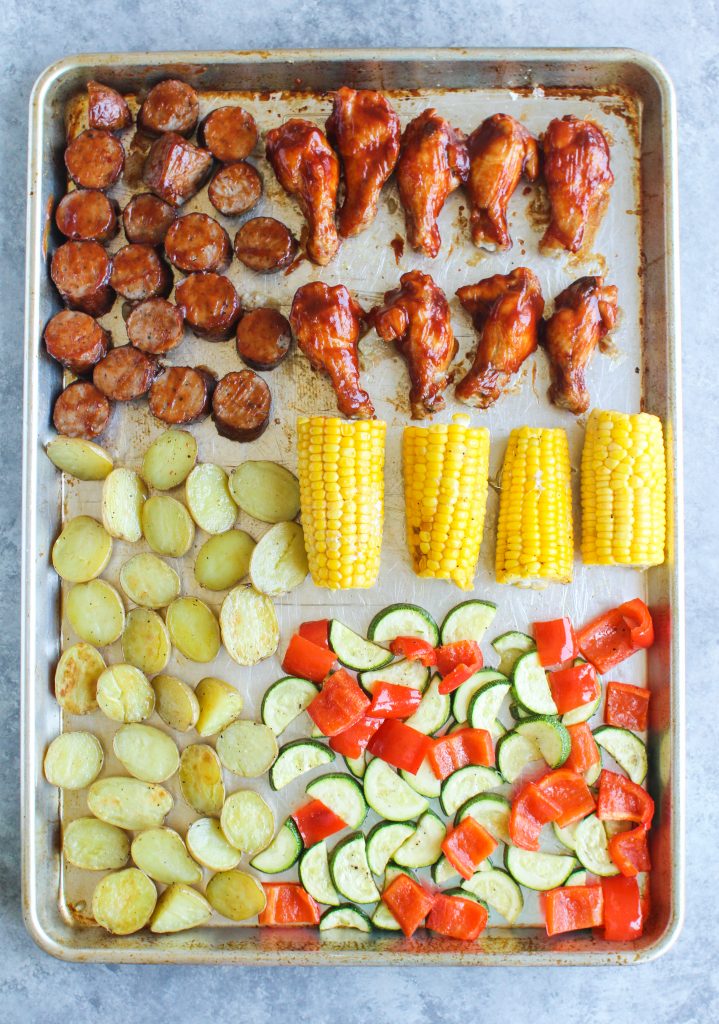 This post is sponsored by Sprouts Farmers Market. Thank you for supporting brands that make Zen and Spice possible! 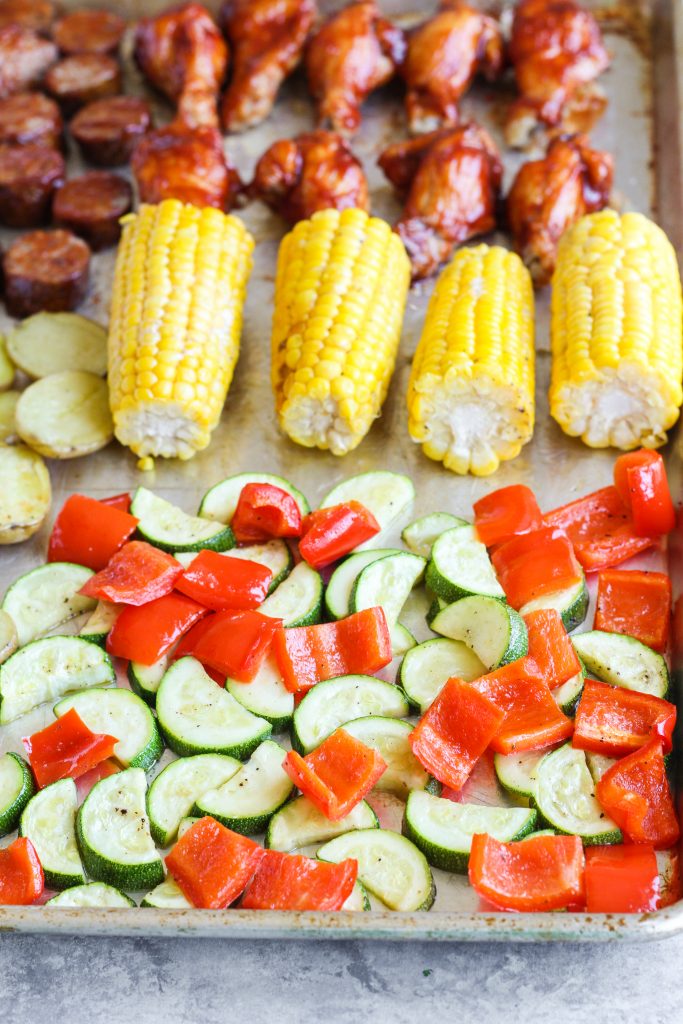 After this crazy year we’ve all been having, we’ve made it to back-to-school time! Whether you’re sending your children back to in-person school, doing virtual, or homeschooling completely, many families will have a whole new routine to get used to. To make your life simpler, pick out a handful of go-to recipes (before school starts!) to keep on hand when you’re too tired/stressed out to decide what to make for dinner.

That’s where today’s recipe comes in handy! It’s a simple recipe (that looks fancier than it is!) that cooks on just two sheet pans in under an hour. You’ll have a delicious dinner that tastes like you just brought home barbecue from your favorite smokehouse! 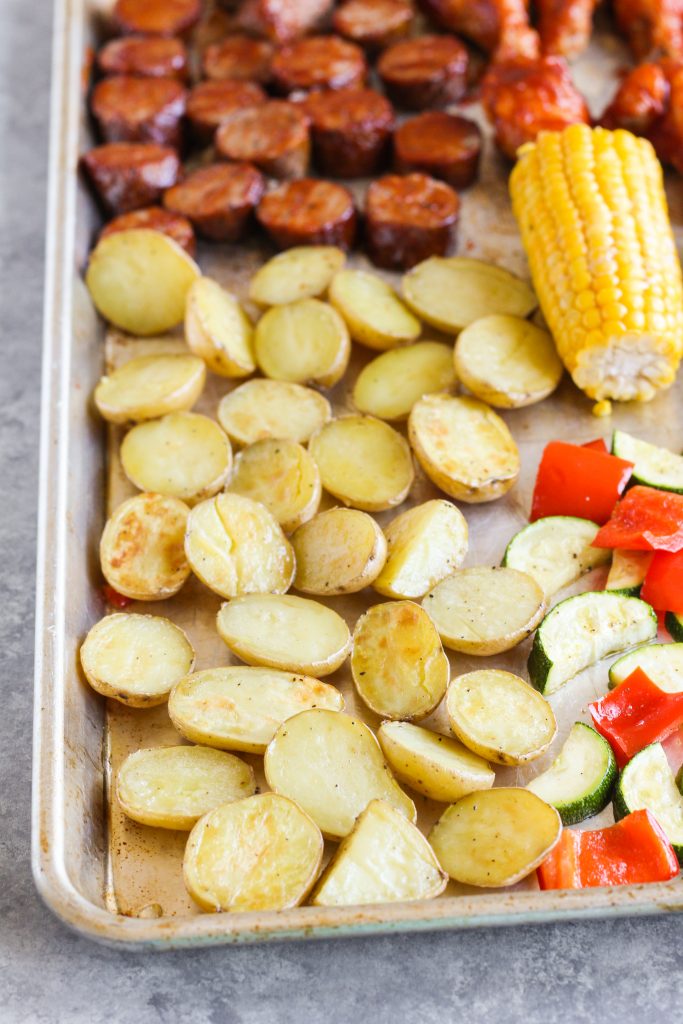 I bought all of the ingredients for today’s recipe from Sprouts Farmers Market. Sprouts is my favorite place to buy produce for several reasons: it tends to last longer than when I shop at other local grocery stores, and they have a much wider selection! For example, they have these adorable baby yellow dutch potatoes that can roast and get nice and fork-tender in under 30 minutes. My local Sprouts also has fresh corn on the cob, and that’s been hard to find at other grocery stores. 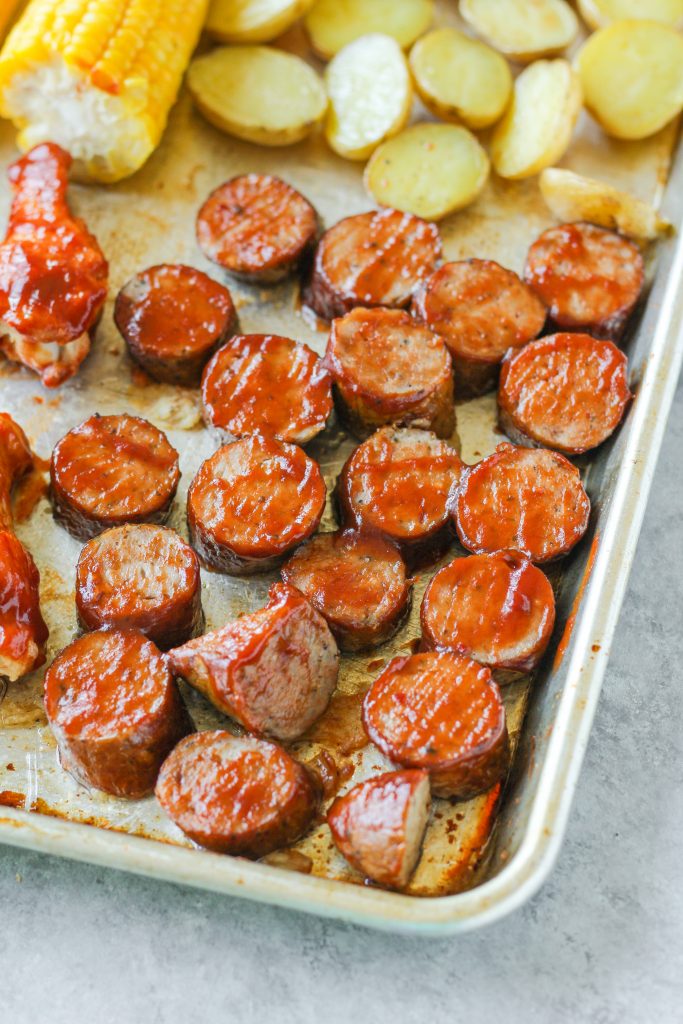 Sprouts also has a really great meat department. I found smoked kielbasa sausage that was really delicious and not too overly spiced, as kielbasa can sometimes be. My husband isn’t a big fan of sausage but he loved this one (smothering it in barbecue sauce probably helped!). I also picked up a couple of pounds of chicken drumettes, which are great for little hands and are easy to get the skin nice and crispy in the oven. 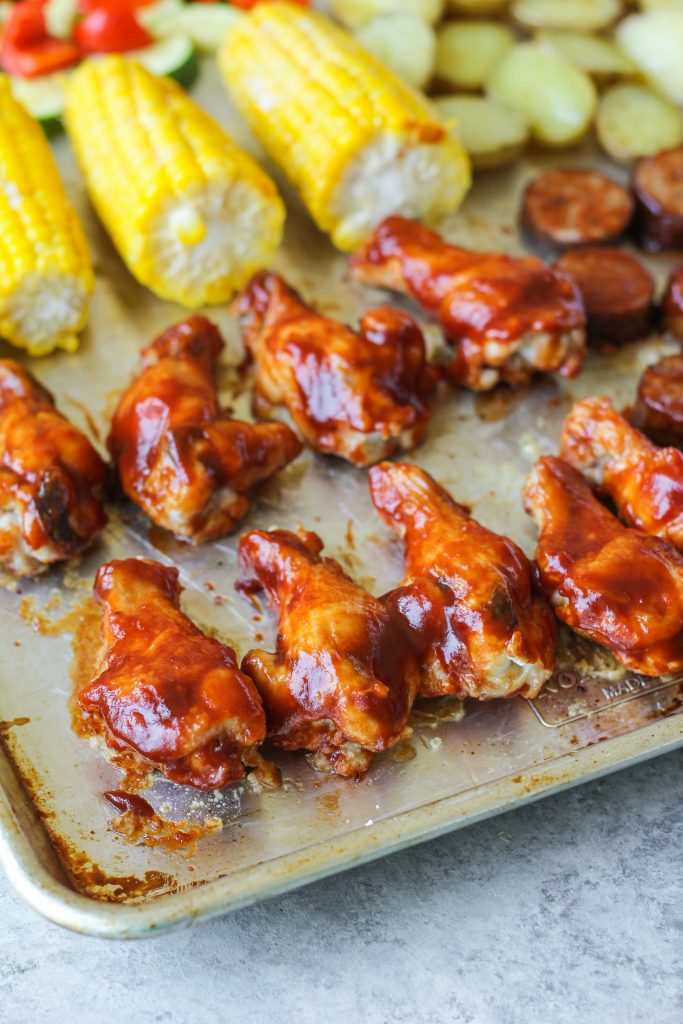 Fresh corn on the cob is my daughter Abbey’s favorite summer vegetable. She ate two cobs when we had this dish for dinner and kept asking for more! Corn is very easy to roast in the oven. You can do it two ways. First, is to remove the husks and wrap it in foil. A second way is to just trim the excess hairs of the husk and stick the entire thing in the oven. About 30-40 minutes later it’ll be done! You want to peel back the foil or husk and poke a kernel with a fork to make sure it’s done before removing from the oven. 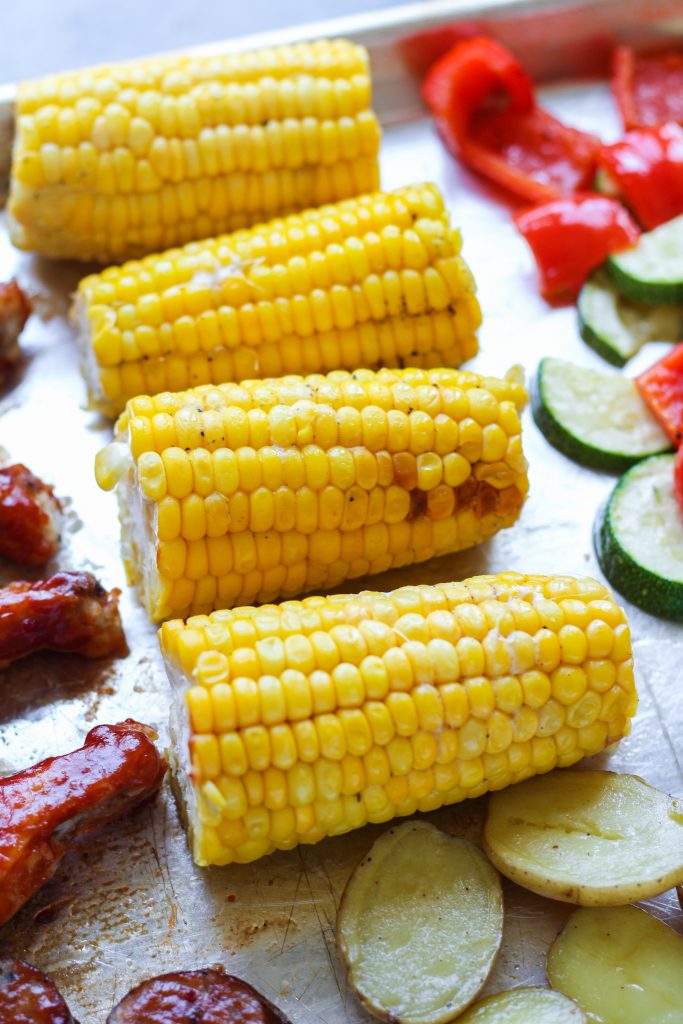 Use your favorite barbecue sauce for this dish! I highly recommend the bourbon barbecue from Sprouts. It has a great tangy vinegar flavor but is also sweet from a hint of molasses and ginger. They also have a great original flavor sauce. 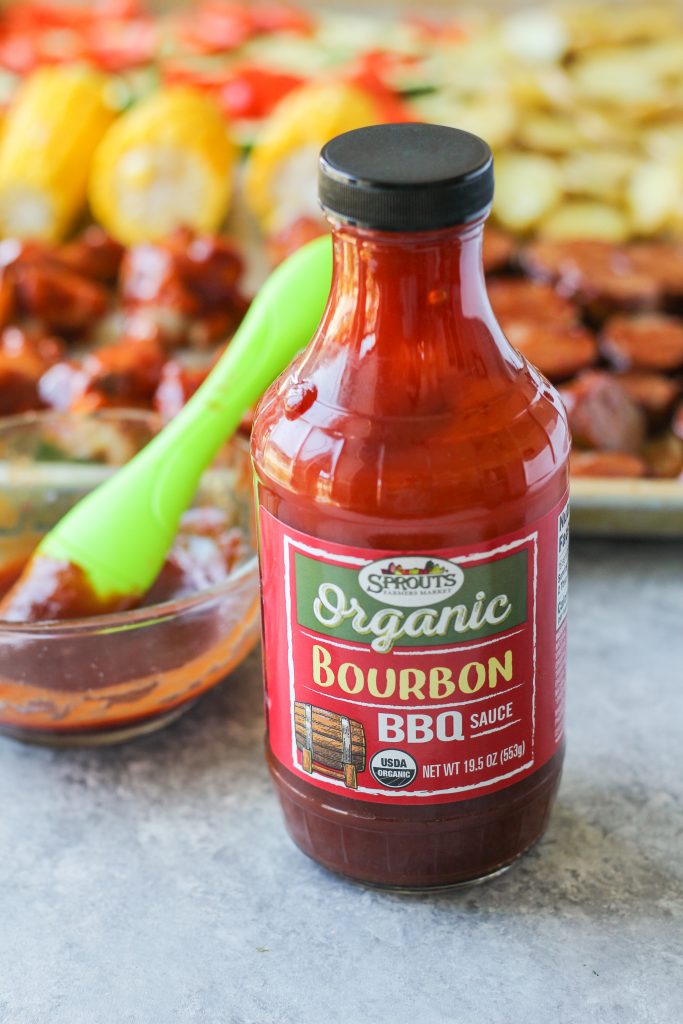 This recipe works in a “stair-step” fashion. You start with the chicken and get that going in the oven (cooks for 45 min). While that’s baking, you’ll prepare the corn and potatoes (putting those into the oven about 5-10 minutes later), then the rest of the vegetables. This allows the items that need longer to cook to get a head start while you prep items that don’t need as long. In the end, everything will end up finishing at the same time! 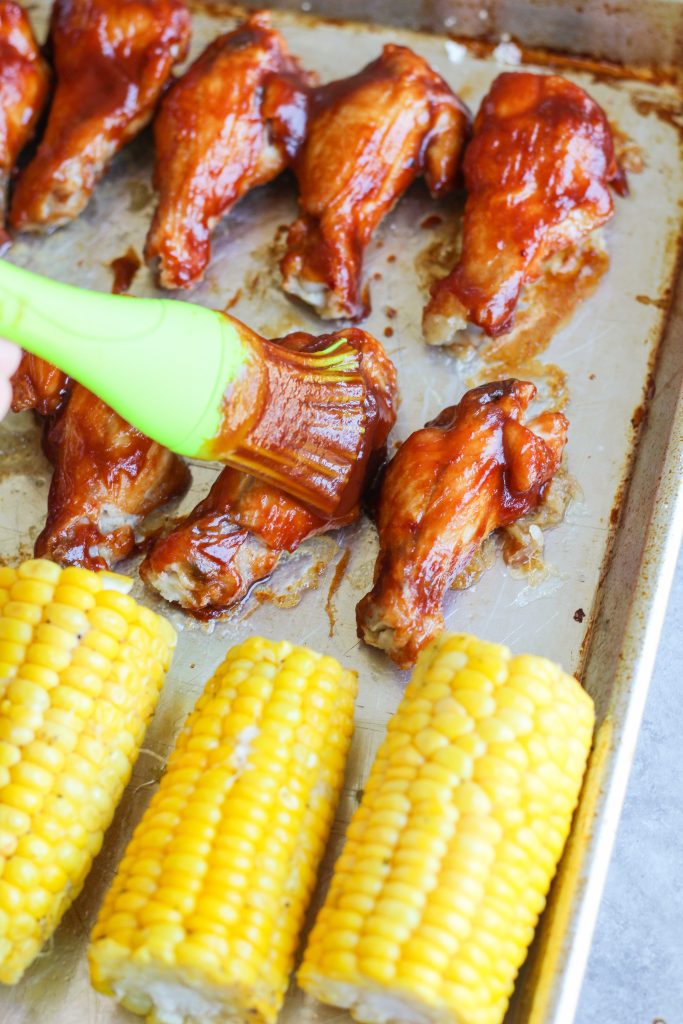 Create an entire barbecue dinner using just two baking sheet pans in under an hour! This recipe utilizes a stair-step method, meaning once the first item is in the oven (chicken), you’ll prep the second item and place in the oven (and so on). Fresh corn on the cob, tender buttery baby potatoes, roasted zucchini, and bell pepper pair deliciously with bourbon barbecue sauced wings and sausage. 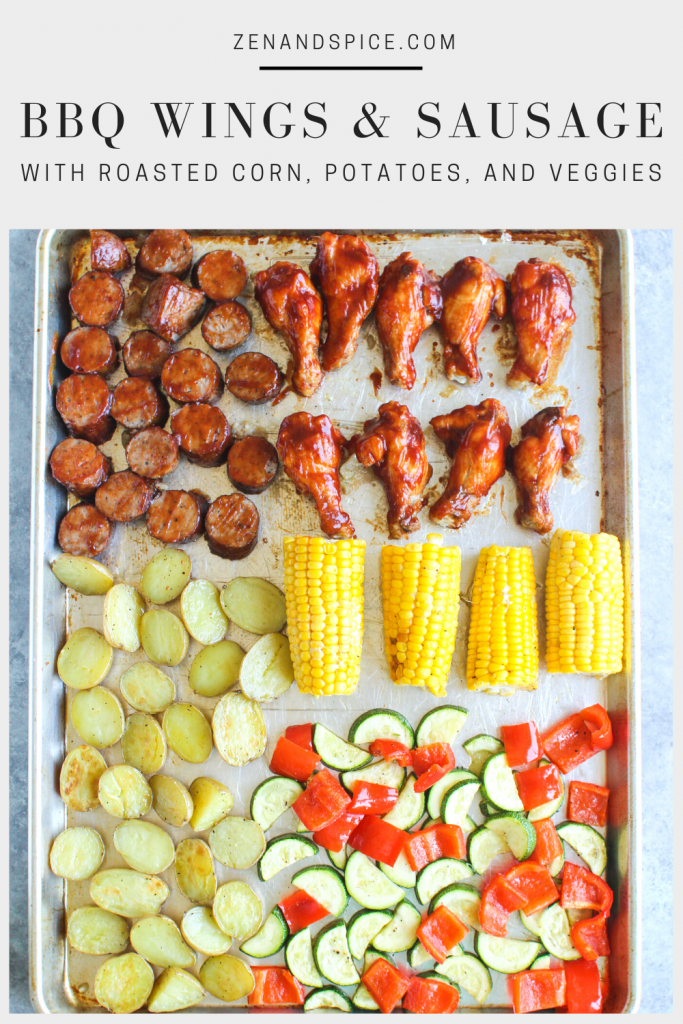