Bring restaurant-quality alfredo to your weeknight dinner with this creamy, cheesy, and savory chicken alfredo Tagliatelle with broccoli and sweet peas. 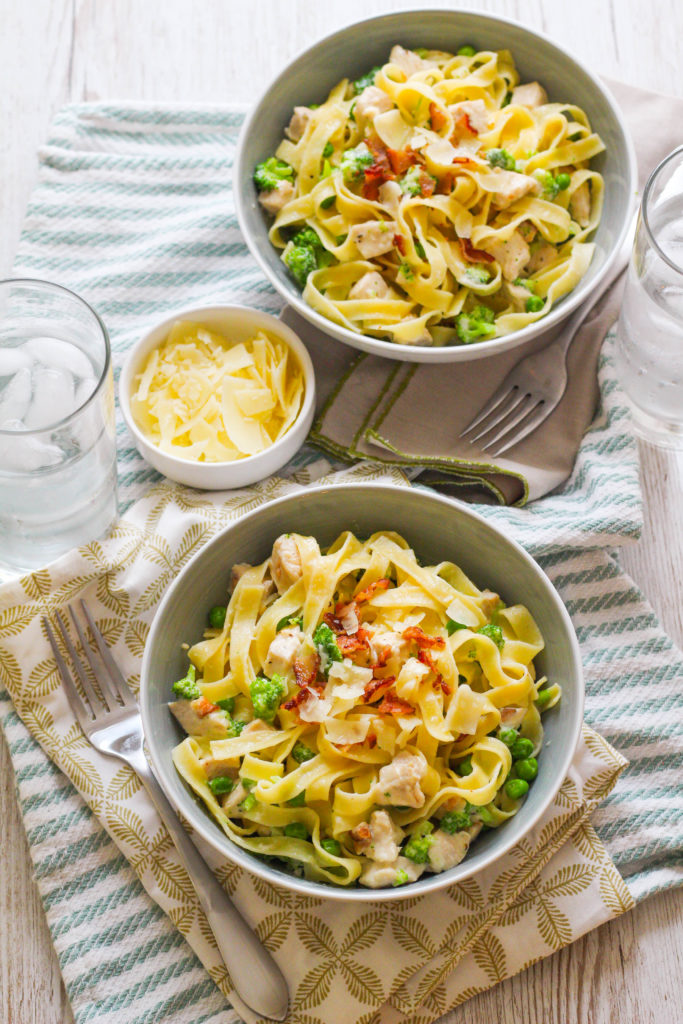 Last week, as an early Christmas present to myself, I bought Julia Child’s book, Mastering the Art of French Cooking. After reading a review in the foreword that said something along the lines of “If studied properly, this book is the same as attending classes at Le Cordon Blu”,  I’ve been pouring over every detail. Each recipe is laid out like a story—Julia walks you through each step, including the “why” for each one. I’ve learned so many things so far, but the biggest thing I’ve noticed, she puts butter in EVERYTHING. 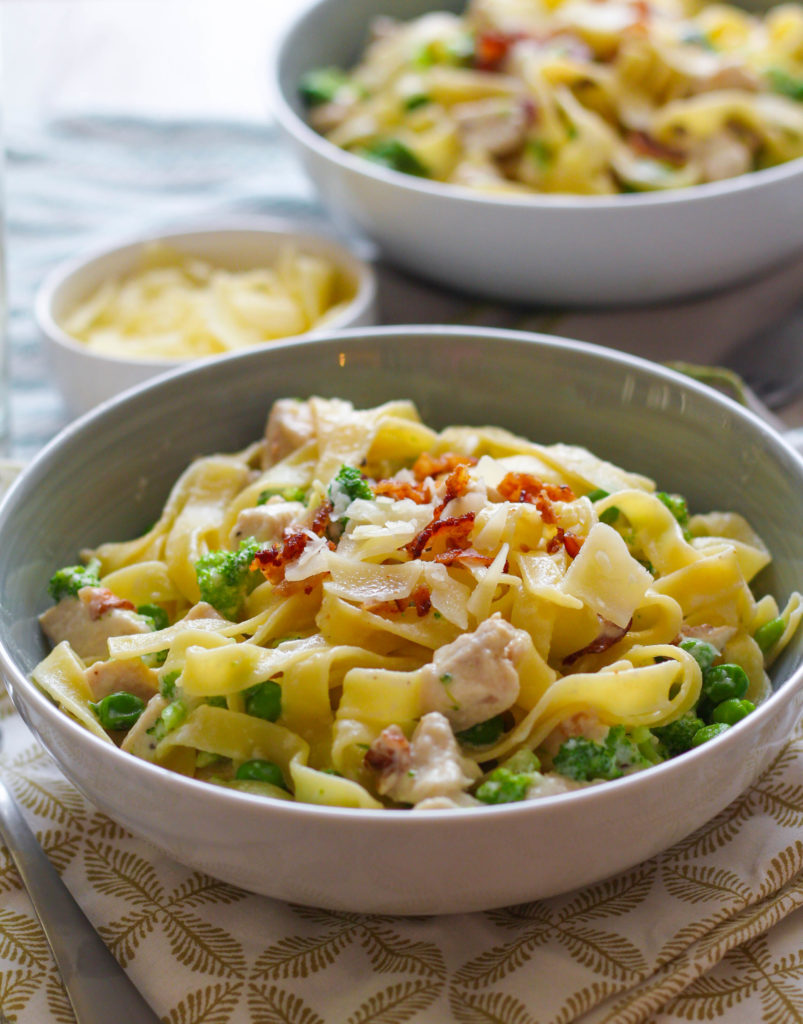 Today’s recipe comes from another cookbook of mine (I have way too many cookbooks): The Dairy Good Cookbook. I received it last year at the Dairy Amazing Symposium hosted by my work, Dairy MAX. Each recipe in the book comes from an American dairy farmer and highlights the goodness of dairy. 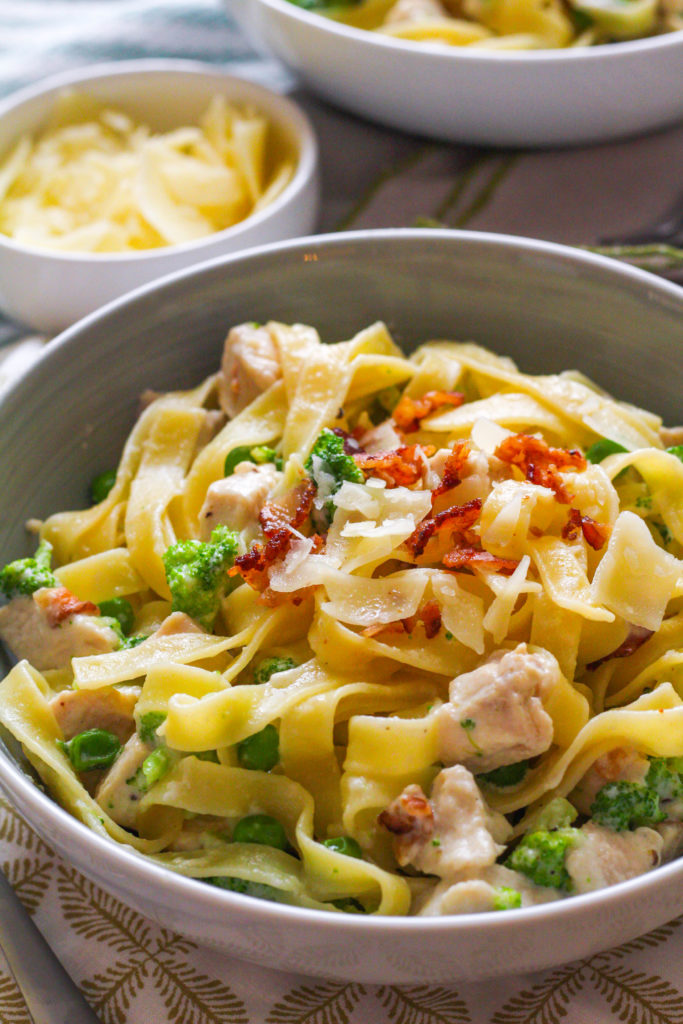 One of the dinner recipes caught my eye: Parmesan Fettuccine with Chicken, Broccoli and Mushrooms. It sounded delicious, but the recipe did call for almost 2 sticks of butter and 3 cups of whipping cream so I decided to remake the dish, but using less butter and subbing out the whipping cream for half and half and two percent milk. 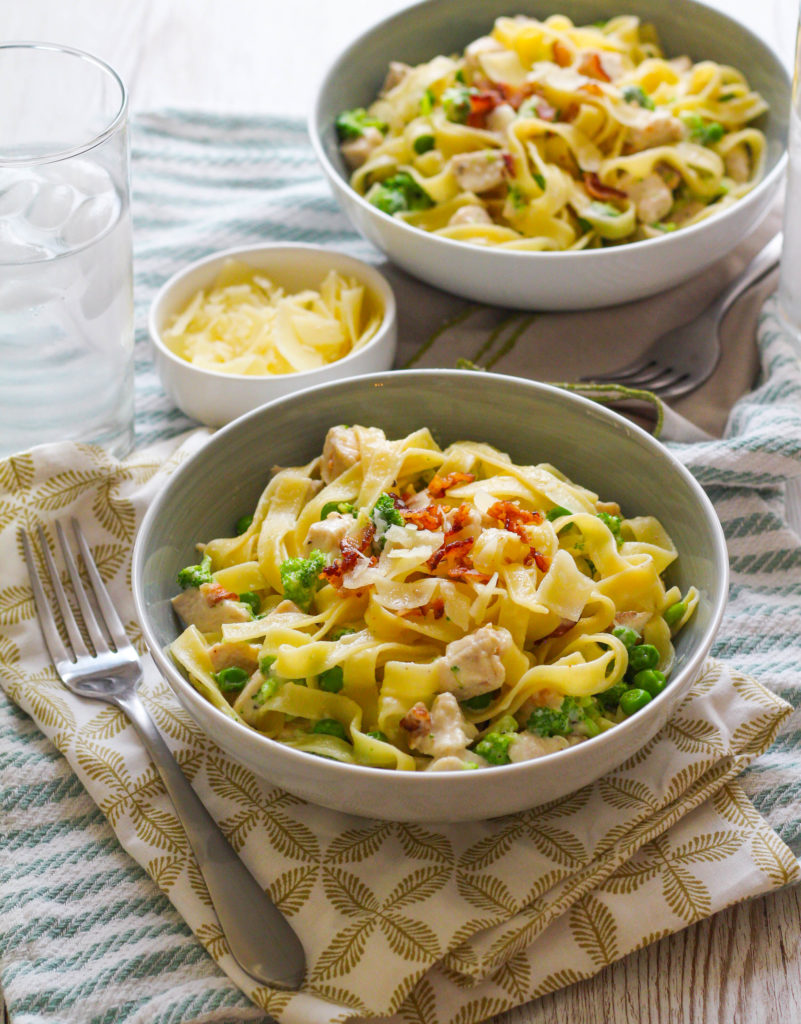 The sauce consists of butter, milk, half and half, garlic, onion powder, salt and pepper and shaved parmesan cheese. I like using shaved parm instead of grated, because when it melts it turns out so much creamier. Grated tends to look and taste grainy and chunky—so go to the deli and spend a little extra on the shaved parm!

I also subbed out the mushrooms for peas and I used onion powder in place of an actual onion (Nick doesn’t like mushrooms or onions…he’s missing out). But thankfully, these two substitutions fell right into place and the flavor was on point. One of the best flavorings in this dish is the two slices of bacon stirred in at the end. Be sure to buy nitrate-free bacon for the healthiest option! 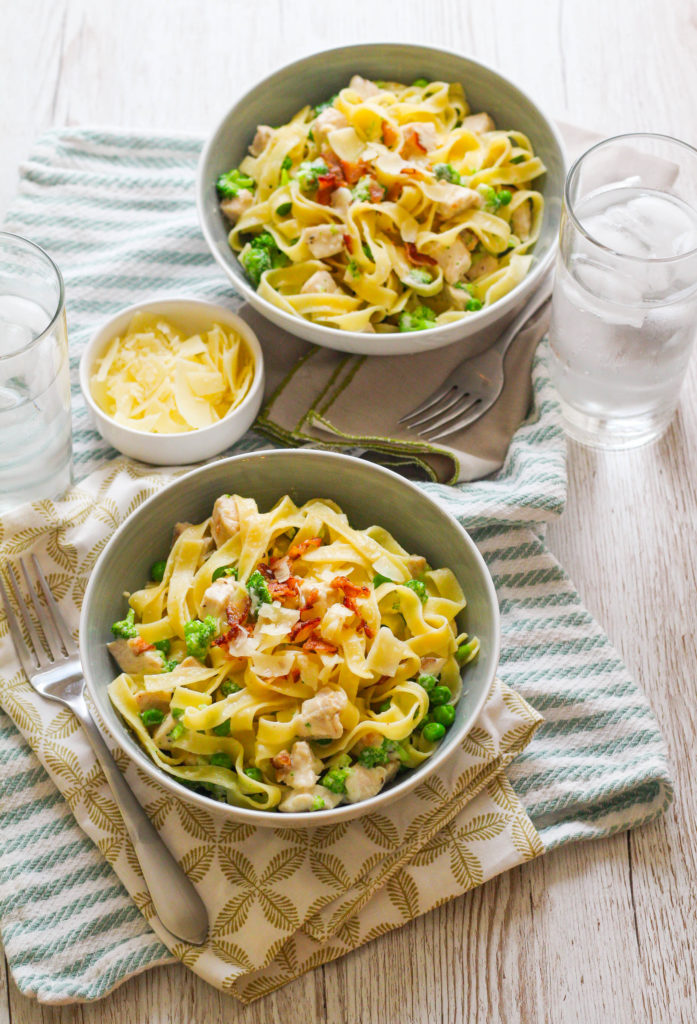 This was also one of the first recipes I shot with my new fancy Manfrotto tripod. I haven’t been using a tripod (mine broke) for a while now, and I was having to shoot at a much higher ISO and shutter speed to avoid dark pictures and camera shake, and I was getting blurry shots. With the help of my new tripod, I was able to shoot these pictures at 4pm when the sun was beginning to go down. All my photographer friends will appreciate that haha!

Here’s the recipe for Chicken Alfredo Tagliatelle with Broccoli and Sweet Peas!