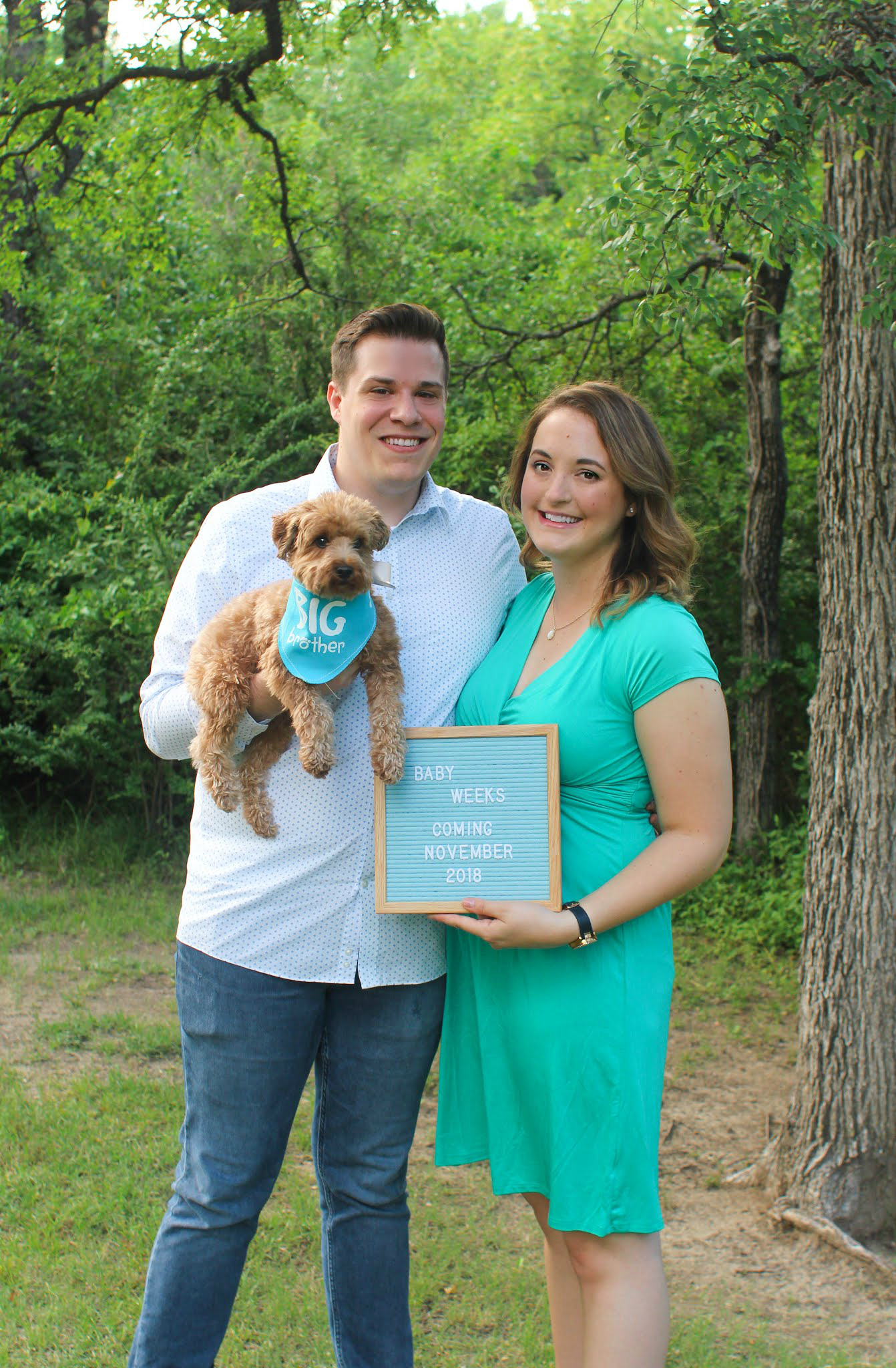 We’ve got great news: we’re having a baby! I’ve been keeping this secret for 3 1/2 months and I’m so glad I can finally share. The blog has been pretty silent as I dealt with first trimester extreme fatigue and nausea but now that the fog is lifting, I’m hoping to get back into things! Nick and I are so excited to grow our little family. We’ve had a some practice (hehe) with our fur baby but know things are about to get a little more busy with an actual human child!

I thought it would be fun to do a first trimester recap, so here goes!

When is the baby due?

We are due on November 13th, 2018. Which is one week after our second wedding anniversary :) Maybe the baby will come early and give us an anniversary present! I am currently 15 weeks pregnant.

When we found out:

A couple days before I officially took a pregnancy test, I had started to have these intense, vivid dreams for days in a row. Each night they got more and more vivid. I could remember every detail– people’s faces, their outfits, specific story line details. I never had dreams like this before. I googled it and it was apparently a sign of pregnancy! At this point I was only about 8dpo and didn’t want to bother with a pregnancy test and have to deal with disappointment so I distracted myself. The next day, at 9dpo, I took one of the cheapo pregnancy tests that I bought in bulk from Amazon and saw the FAINTEST line you could ever possibly see. You had to squint to see anything. But apparently a line is a line, so I took that as good news! I didn’t tell Nick until the next day, however. It was Saturday, March 3rd and when I woke up, I took another cheapo test. The line was definitely darker! I had a digital test ready, and the funny thing is, that test came back “Not Pregnant”. But I told Nick anyway, just going off the line from the cheapo test.

How I told Nick:

Since we knew we wanted to start our family, I bought a “Big Brother” puppy bandanna from Amazon six months before I actually got pregnant and just kept it hidden away until it happened. On that Saturday morning, Nick was in the kitchen fixing his breakfast. I snuck the bandanna on Link and set him loose in our apartment and tried to see how long it would take Nick to notice. It didn’t take him too long! He was surprised and very happy. 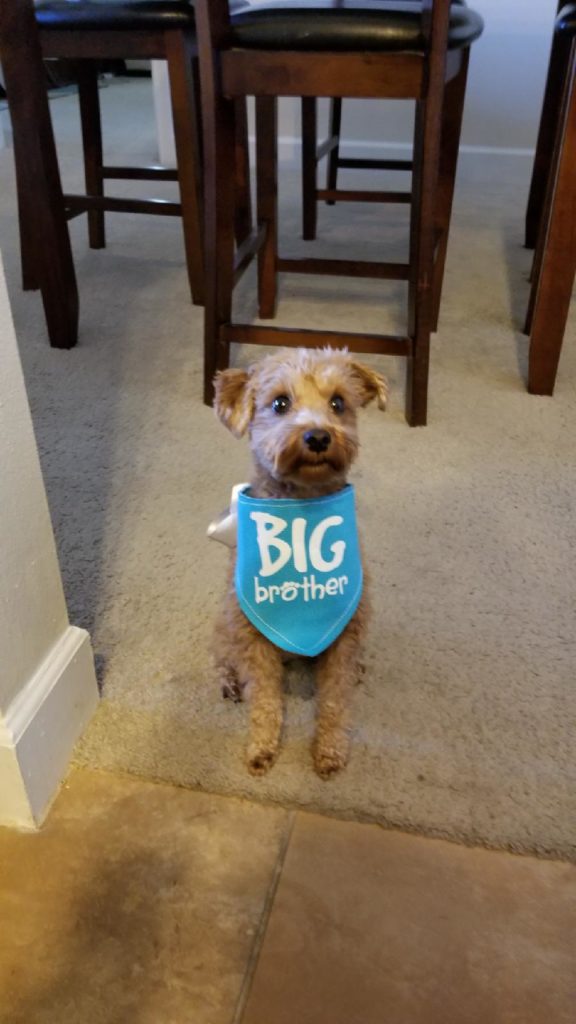 He was a little skeptical of the faint line on the cheapo test, so the next morning, I went and bought another digital test and this time it came back “Pregnant”!

How we told our families:

We told Nick’s sister at 7 weeks while we were out in Los Angeles visiting her and her new baby. 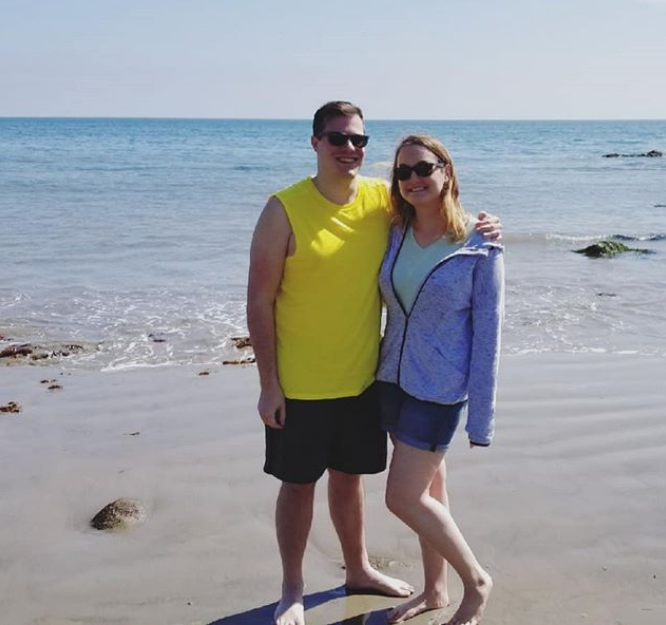 We waited until 9 weeks to tell my family. It was my sister’s birthday in April, and I thought it would be fun to surprise her then. I bought a t-shirt from Amazon and wrapped it up to look like a birthday present and saved it for the very last gift. My Mom and Dad were also there. My sister’s reaction was PRICELESS. We got it on video but it was basically both of us crying along with my Mom and everyone was so happy! My Dad told me that he was so happy because his mom, my Oma, bought these “Oma” and “Opa” (Grandma and Grandpa in German) mugs and whichever of her kids had grandkids first got to keep them. My Dad exclaimed, “We get the Oma and Opa mugs! We won!” 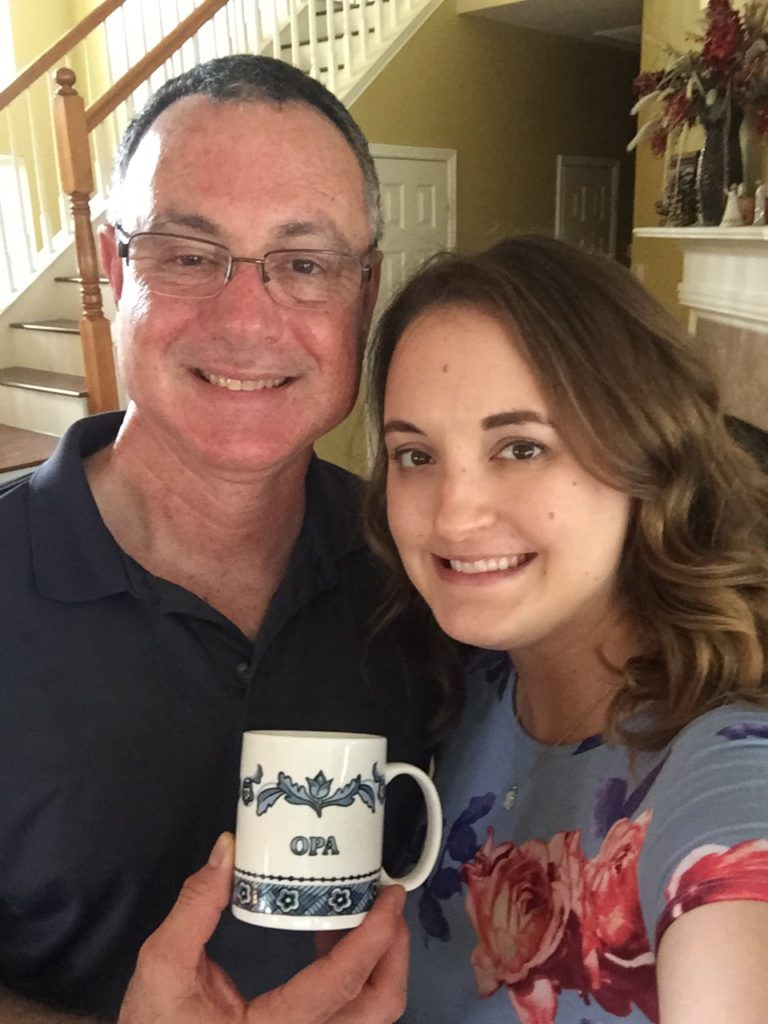 At 10 weeks we told the rest of Nick’s family! We used Link’s bandanna again. We were all gathered together and I snuck off to put the bandanna on Link and came back into the room and handed him to my mother in law. It took her a second to realize what it said but we surprised them all as well!

On Mother’s Day, we had a brunch with my Mom, Grandma and Aunt who lives in town. I bought a mug for my Grandma and wrapped it up as a gift. At first she thought I was just calling her a “good” grandma until she finally got it, haha! 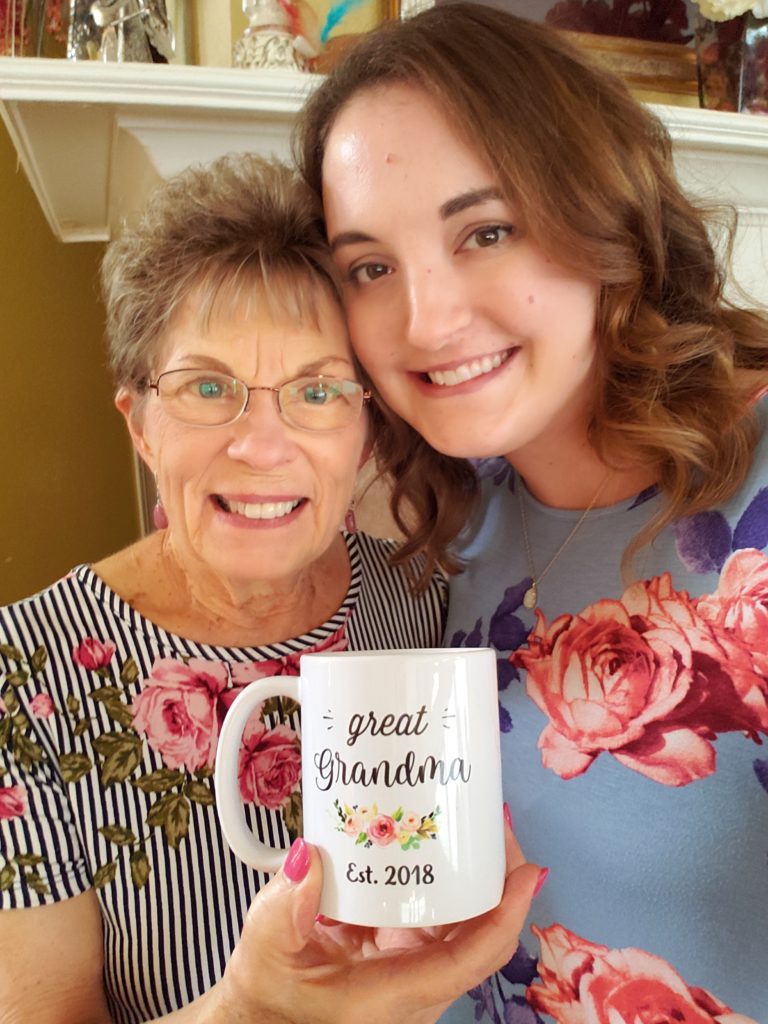 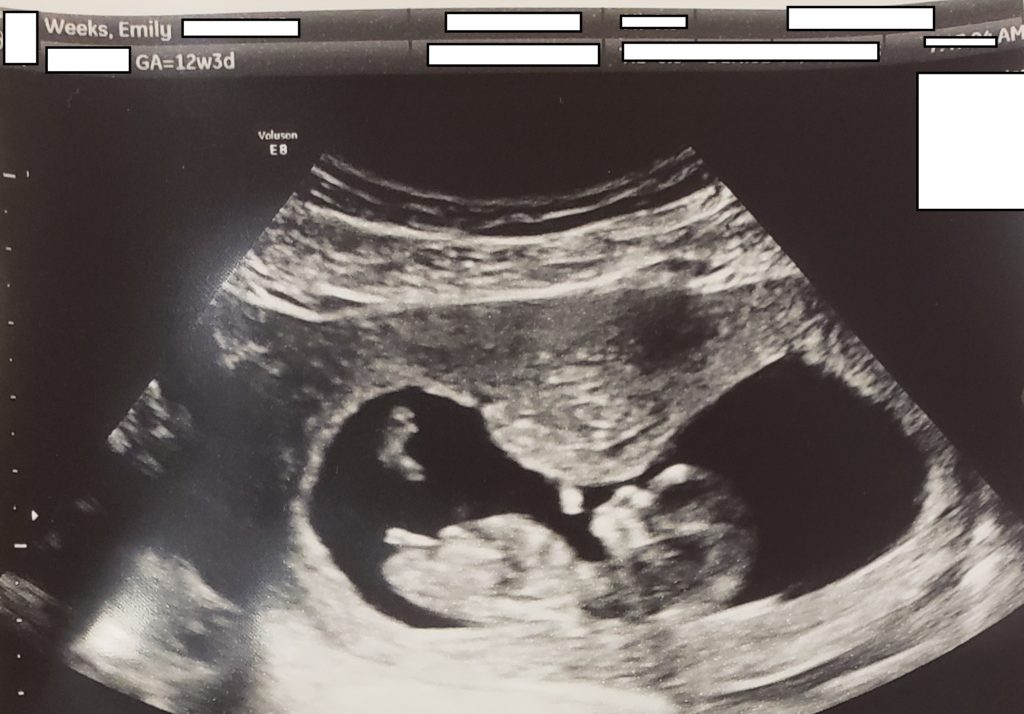 Despite all the blue in our picture (unintentional), we won’t find out the gender until our 20 week anatomy scan, which will be towards the end of June. Since I’m 27, I don’t qualify for the early genetic testing to be covered by our insurance. Our sonographer told us at 12 weeks she was 75% sure of what it was, but told us not to go painting any rooms, lol. We both don’t care either way, but I am leaning towards wanting a girl first. My sister and best friend adamantly say it’s a boy. The rest of our family is about 50/50 on their guess. When I take the wives tale quizzes, my answers are all 50/50 as well!

I felt completely normal until 7 weeks, when the nausea kicked in. My doctor also had me on progesterone so that made the nausea worse. It just felt like car sickness– a nasty, queasy feeling. It felt gross but I never got to the point of throwing up. I still haven’t and I find that very strange– but I guess I should feel lucky! I completely lost my appetite from weeks 7 – 12 and barely ate anything. Nothing sounded good and I had to force myself to eat cereal, ramen noodles, cheese, and plain pasta without any sauce. For five weeks I don’t think I ate more than a couple bites of vegetables or meat. It was hard to get my protein in, but got most of my protein from cheese and yogurt!

After I stopped taking the progesterone, my appetite came back in full force. At 14 weeks I get hungry very easily and still get a little nauseous if I don’t eat on time. I’ve been craving fresh food- lots of fruit and fresh veggies. I can’t stand the thought of eating something processed or out of a box now. Giant salads have been my jam over the past week and I can finally eat chicken again. The thought of ground beef still grosses me out, but the other day we went for barbecue and I ate a giant plate of brisket and it was amazing. I’m not craving anything weird — just in this fresh food stage right now. Looks like my body is making up for the 5 weeks of no veggies! 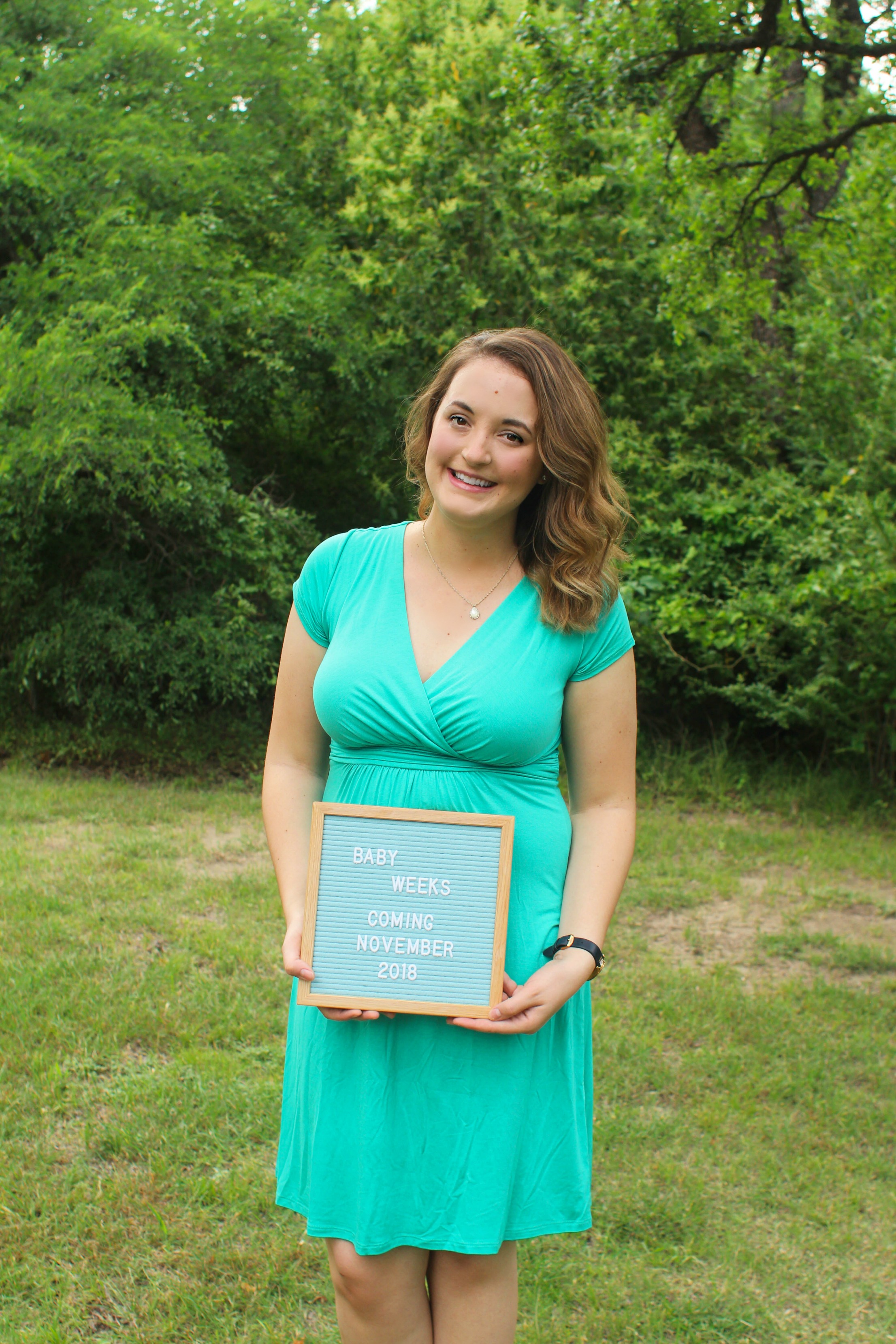 I really miss all sources of caffeine. I haven’t had any coffee or caffeinated beverages since finding out I was pregnant and I’m SO tired all the time. Especially in the first trimester, I could barely stay awake after breakfast and lunch. I’d have to take a quick nap after lunch almost every single day. Some days would be a two-nap day. I can feel a little of my energy coming back now that I’m in the second trimester. I also miss refreshing alcohol– like wine spritzers or an ice cold beer. It’s getting so hot outside that a beer with a lime sounds amazing. That will have to wait!

For the past 14 weeks I’ve had vivid dreams EVERY NIGHT. I’m not kidding, every single night is like a novel that gets played out in my dreams. They’re so detailed and sharp and are sometimes scary and other times just weird and funny. I’ve started to have a couple dreams about babies, some good and some bad. Most days I wake up and don’t feel rested at all because I’ve basically had a movie playing in my head all night. I also get up 2-3 times to pee which is super annoying (I know this will only get worse…). Laying down flat also causes major nasal congestion so I’ve started wearing those attractive nasal strips to open up my airways. 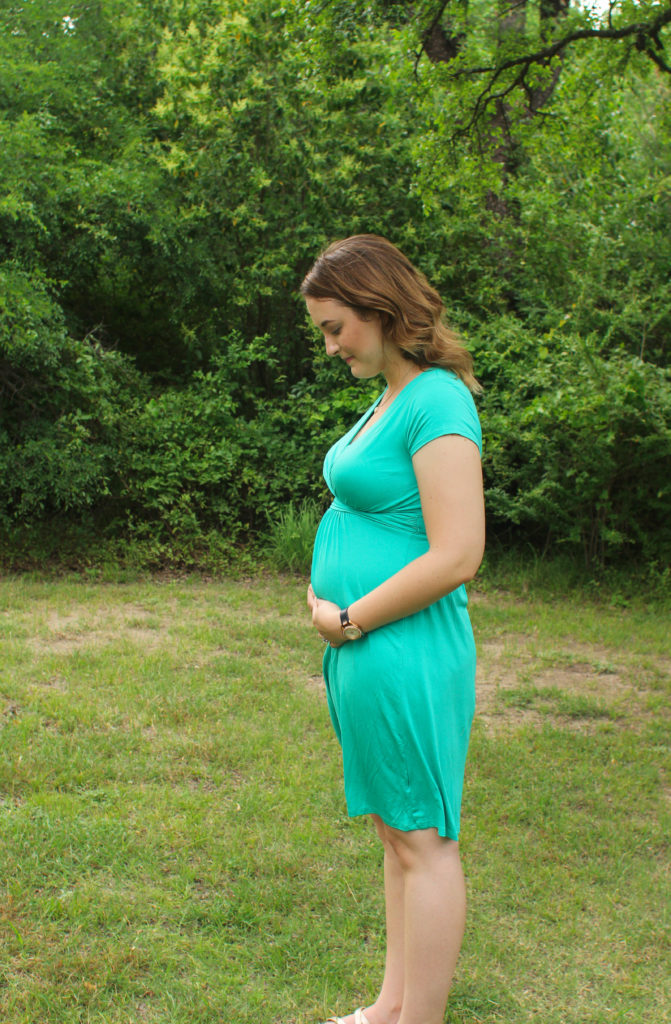 For the past two weeks, I was hit with a really bad cold which turned into bronchitis. I had to take two different antibiotics to finally shake this thing. I don’t normally get sick for so long! The coughing fits are pretty bad but I feel like it’s starting to get better. This is actually the worst I’ve felt the entire pregnancy!

I thought a lot about if I wanted to know my weight before and during pregnancy. I haven’t weighed myself in over a year and a half at home and my life has greatly improved because of this. Paying attention to my inner intuitive eater has been a ton more successful when I don’t know what I weigh. At my first two prenatal appointments, I stood backwards on the scale and kindly requested that they not tell me the number. I told my doctor to just let me know if things were progressing as normal weight wise, but I don’t want to know the number. So far, this has been working really well for me. I’m paying attention to the foods that sound good to me and when I’m hungry. When I’m not focused on the scale, I find that I pay much better attention to my body.

At 14 weeks, I can see a small bump forming! Everything else has definitely gotten bigger. My face is more full which is hard to get used to, but I just have to remind myself that I am literally growing another human inside of me. I’ve had to buy maternity pants and shorts along with some dresses as none of my other clothes fit anymore!

Another perk– my acne has completely disappeared. Before I got pregnant my face looked like a war zone (coming off birth control is a bitch). The second I got pregnant it all vanished. I’m hoping that it will stay that way after the baby is born but who knows…

Link is in for a big surprise. I don’t think he quite knows what’s about to happen. He’s a very spoiled and attached little dog so I have a feeling this will be challenging. If you have any tips for introducing a dog to a baby, please let me know!! He doesn’t like our niece and nephew and growls and snaps at them. We are hoping that when we bring home a baby that smells like us he will be more open to accepting it as part of the pack… 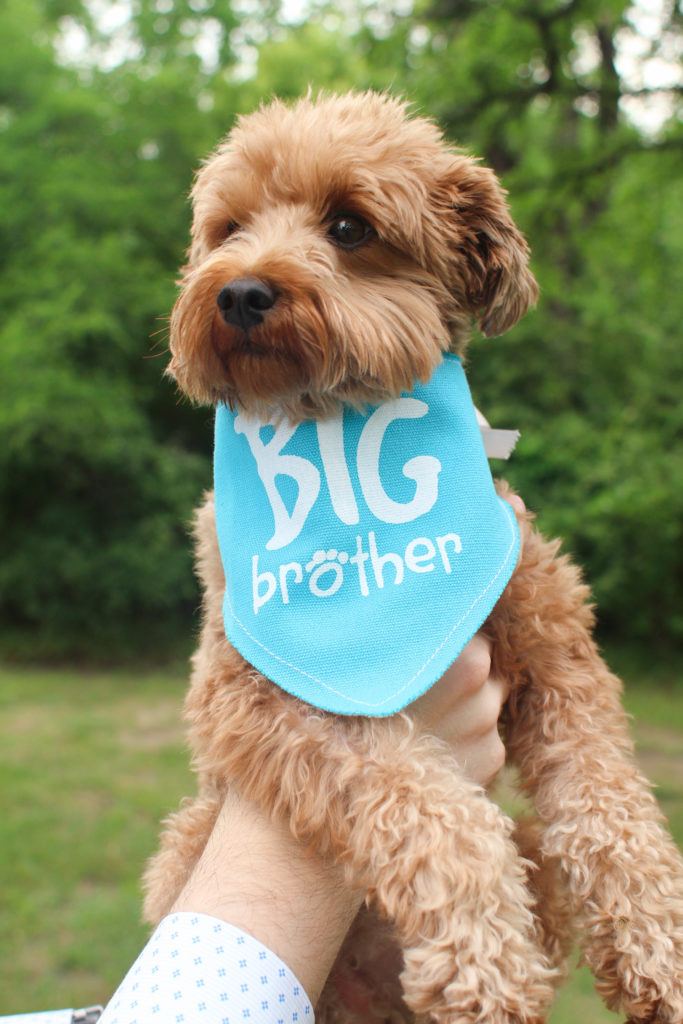 That’s all for now! I will likely do another recap in another month or so. Maybe after we find out the gender. :)