This month I’m participating in something called Recipe Redux! This is a website founded by registered dietitians that challenges bloggers to take their favorite recipes, and make them healthier for you. On the 22nd of each month, members share their recipe and link it to other blogs that are participating as well. This month, the theme was:

“Pizza Party! Give the delivery guy a day off; whether it is for Friday Fun Night with the kids, a pizza chef competition among friends, or for Super Bowl Sunday (February 2). Share your healthy pizza recipe that we can all look forward to after a long week…or a long day.” 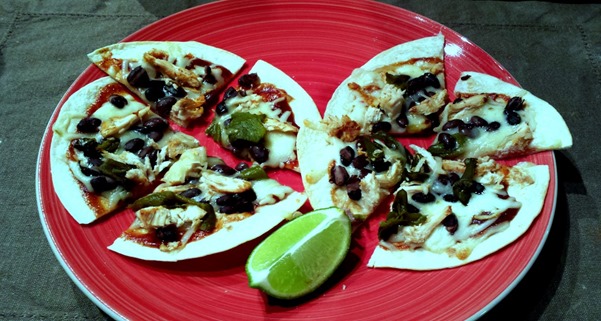 My boyfriend actually came up with the name for this recipe—since we live in the south, “Rodeo” was appropriate for something that had beans and BBQ sauce :) He had been asking me to make roasted poblano peppers for the longest time so I thought I’d make a pizza out of them for this month’s Recipe Redux.

First I baked some fajita size tortillas in the oven until they were slightly crispy, about 6 minutes. Then I added a little dollop of Weber’s Real Molasses BBQ Sauce (the lowest sodium BBQ sauce I could find at the store), pepper jack cheese, BBQ chicken from the crock pot that I had made the night before, black beans, and roasted poblano peppers.

Then I put them in the oven for another 6-7 minutes, and they came out nice and crispy with melty cheese :) 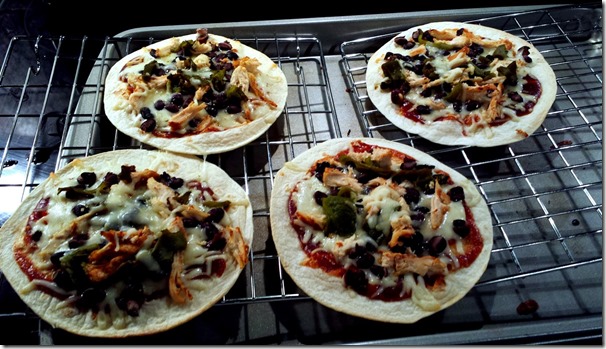 I used a pizza cutter to slice into fourths, and served with a lime wedge. We were going to have cilantro and avocado slices, but the cilantro went bad in the fridge and I totally forgot about the avocados. But this was DELICIOUS! The boyfriend loved them, so much that he gave them a name.

What really made these tasty was the chicken and poblano peppers. Definitely take the four hours ahead of time to let this chicken slow-cook in the crock pot. This was the first time I had made roasted poblano peppers, and quite frankly it was a little scary. The directions online said to roast for an hour, but after ten minutes the peppers were almost completely brown and after 30 minutes the stem of one of the peppers actually caught fire… that’s when I knew to take them out of the oven. But… it was totally worth it.

Check my recipe box for the recipe!

Check out what other blogger’s posted for this month’s pizza theme!