I’m stepping a little out of the box today to comment on something I’m very passionate about.

Gawker recently published an article by blogger Science Babe called The “Food Babe” Blogger Is Full of Shit. It’s been shared on Facebook over 10,000 times and picked up by various news outlets, including Vox and Elle.

The Food Babe is Vani Hari and she’s the author of a blog with over a million readers, dubbed the Food Babe Army. She calls herself an “investigator” and is known for her campaigns against popular foods, such as convincing Chick-fil-A to use antibiotic free chicken, and Kraft to remove yellow dye from it’s mac and cheese.

She’s had quite a few controversial articles written about her, including the NY Times, NY Post, NY Mag. It’s worth noting that Hari lacks credentials in nutrition or food science– her degree is actually in computer science.

I won’t go into too much detail about Science Babe’s article because you should really read it if you have time. But here are the main points that I think you should take away:

So, the Food Babe’s efforts  got Chick-fil-A to announce that they will remove artificial dyes, artificial corn syrup, and TBHQ from their products, as well as begin using antibiotic free chicken. This doesn’t change the fact that a Chick-fil-A fried chicken sandwich contains almost 1400mg of sodium and 18g of fat.

Food Babe got Kraft to announce the removal of harmful yellow dye from their Mac and Cheese. This doesn’t change the fact that one box has what feels like one large serving to most kids and teenagers (when really it’s three servings), 1700mg of sodium, 19g fat, and 1200 calories.

Getting companies to disclose their full ingredient lists and using less processed ingredients is a good thing. But are added “chemicals” and “GMO” foods, non-organics and unnatural preservatives really the issue? Are non-organic fruits and vegetables the reason 2/3 Americans are overweight and obese? As a dietitian, I’ve never come across a patient that became overweight and sick from eating too many non-organic fruits and vegetables.

Over-eating, large portion sizes, and reliance on pre-prepared restaurant foods are the real issues. High amounts of sodium, saturated fat, and carbohydrates continue to take their toll on those consuming them. Why is the focus on chemical preservatives, GMO foods, and organic vs not organic, when the CDC reports that only 32% of adults in the U.S. ate fruit two or more times daily in 2009, and just over a quarter of Americans, 26%, eat vegetables three or more times per day? 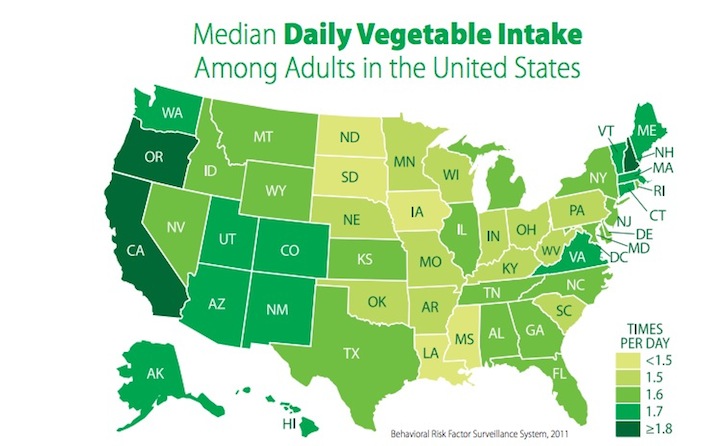 Why aren’t we focusing on reducing the sodium in our restaurants, where the average meal contains 1,000-4,000mg of sodium per plate? Why aren’t we focusing on asking food companies to add more whole grains and fresh vegetables to their meals, instead of using white pasta, breads, and rice? What about asking for smaller portion sizes? What about requesting that frozen food companies create healthier frozen meals, that don’t contain your entire day’s worth of sodium in one box?

All dietitians would agree that if the majority of Americans ate the recommended 5-7 fruits and vegetables per day, whole grains, lean proteins, and heart healthy fats, that the rates of obesity, diabetes, cardiovascular disease, and cancer would greatly be reduced. Regardless of whether or not the sources contain GMOs, are organic, farm-raised, free-range, or without hormones.

Food is not rocket science. People have been eating and cooking food since the beginning of time. What makes food complex is the food industry’s never-ending quest to improve profits – often at the expense of the consumers. That is where the Food Babe Army comes in – we let people know what is really in their food so they can decide for themselves.

So, my question is: Why not promote fresh, unprocessed food instead of restaurant and pre-packaged food?

Asking companies to remove certain “unsafe” chemicals from their food won’t reduce the prevalence of obesity, heart disease, diabetes or cancer. Reducing portion sizes and the amount of sodium definitely will, as would encouraging people to eat real, fresh foods at home.

“Eat food. Not too much. Mostly plants.”